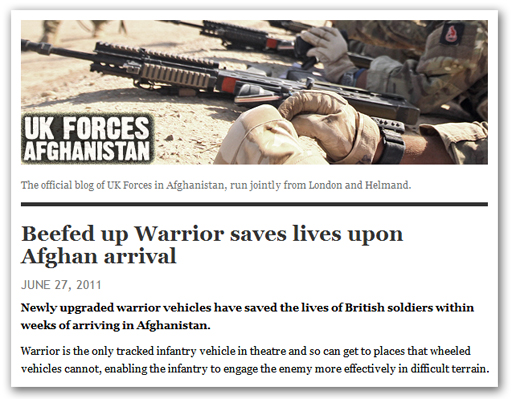 Despite attempts on the Booker column comments to assert otherwise, the Warrior is an "unprotected vehicle" in terms of mine protection, lacking as it does the specific design features that would allow it to be classified as a mine-protected vehicle.

Nevertheless, in an attempt to reduce the vehicles' manifest inadequacies following a fatal attack in November 2008, the MoD spent £40 million on an upgrade programme, called the "Warrior Theatre Entry Standard (HERRICK)", which included a provision for belly up-armouring.

Unfortunately, it seems the Army started to believe its own propaganda, parading the IED protection afforded by the upgraded vehicle, with a piece on the MOD website, repeated on the official Afghanistan blog telling us how it had saved lives "within weeks of arriving in Afghanistan".

Just a short time after receiving their modified Warrior Infantry Fighting Vehicles, the pieces ran, troops from the Mercian regiment on patrol in the Durai East region of Afghanistan’s Helmand Province survived a serious IED blast thanks to the vehicle's improved protection.


The patrol started off like any other, with no insurgent radio chatter or anything. About half-an-hour in, an IED was triggered by the Fire Support Team vehicle. The force of the blast knocked the Warrior onto its right-hand side.

When the blast went off soldiers from the second Warrior confirmed people were OK and talking inside the vehicle. At the same time the dismounted troops made best speed over, using the metal detectors in order to avoid any secondary devices. As it turned out, all the crew were conscious and not suffering from any serious injury.

Rather than parade this "miraculous escape", though, the Army might have been better advised to have taken it as a warning that the Warrior was being targeted.

When I was researching for Ministry of Defeat, looking in detail at all the IED incidents, what came over was the high failure rate early in the campaign. It thus became very evident that the insurgents were experimenting, trying out and improving their skills until, at last, they – in their terms - "got it right", whence we saw a whole spate of successful attacks.

What was also evident was that the insurgents were monitoring the Western press (and TV), and other websites, both responding to news and manipulating it. The concept of the "spectacular" was well rehearsed, an incident staged specifically to maximise press coverage. 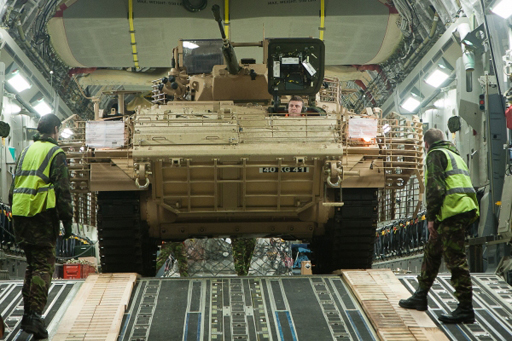 There is general acknowledgement that the Taliban is quite skilled at this process and it is not at all untoward to assume that it could have read the publicity on the upgraded Warrior and treated it as a challenge. With the Warrior having already been featured in an IED hunt by the BBC in a hubrisitic and (militarily) illiterate piece in April 2010, one can imagine that taking out a Warrior could have become a high priority for the Taliban.

Be that as it may, the recent destruction of the Warrior shows up the MoD at its most inept. Quick to exploit the protection afforded by the upgrade, we then get the well rehearsed excuses when it fails. Having spent taxpayers' money - £40 million in this case (which would have bought another 40 Mastiffs) - they quite clearly associating the saving of lives with the added armour. Yet they distance themselves from any responsibility when things go wrong and that self-same armour fails.

The MoD could have done no better than to have re-read its original publicity when the Warrior started operations in September 2007. The vehicle, it said, has brought firepower, mobility and protection for its crew and enables them to provide fire support in places where it is needed, particularly for dismounted troops going into dangerous situations.

In this instance though, it might not have been lack of armour that contributed to the deaths of six soldiers so much as MoD hubris, laying down a challenge that its armour could not meet, while using the vehicle for the purpose for which it was never intended.