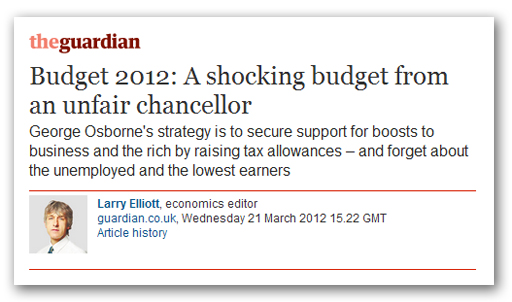 Well, so what if you think it's a "shocking budget from an unfair chancellor? You would probably think that of any budget produced by a Tory chancellor, much less one produced by little Georgie. The thing is, Larry, the real problems go far deeper. And somebody has to labour this, apart from Witterings from Witney, who is doing an exceedingly good job.

The thing is Larry, I didn't vote for this administration – nobody did. It is a coalition formed after the election. And I certainly didn't vote for George Osborne - nor could I. Only those in his constituency got that opportunity … and only 37.5 percent of the electorate voted him in as an MP. He does not even have a majority in his own constituency.

As for the budget – I didn't ask for it, and was not consulted about it in advance – or at all. My approval has not been sought, and neither has anyone else's, outside parliament. On my behalf, supposedly, it will be challenged by my local MP – but I didn't vote for him either. Neither did over seventy-five percent of the electorate. He got his seat from 24.7 percent of the people on the register.

Even if I had voted for this man, though, he is on the wrong side, so his vote doesn't count … so my vote wouldn't have counted anyway. Even if he was on the "right" side, he (or maybe she) still would not be representing me. They would be obeying their whips, and voting through the budget on the nod.

So, it's like this Larry. We have a budget produced by a man who could not even command a majority of the electorate in his own constituency. He is appointed as chancellor, rather than elected by us to the post, as part of an administration no-one voted for.

And he has producing a budget that is now going to be imposed on everyone, without consultation , lacking specific or even implied consent, with which we are not allowed to disagree, on pain of administrative action or even jail.

It would seem that being "shocking" is the least of our problems. Thus, before we address your little concerns, Larry, could we just remind ourselves why it is we call our government democratic? Or perhaps Mr Jenkin could tell us?