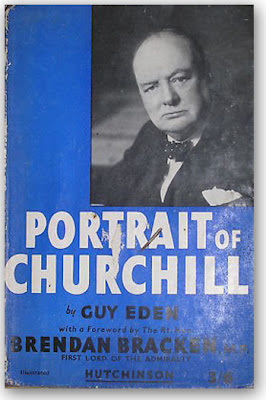 What should have been a quick job this morning, to check a few facts about the Battle of Britain, turned out to be a marathon which has leached into the afternoon and involved much labour – hence keeping me away from the blog. Such are the fruits, however, that I thought I would share some of them with you.

What makes it worthwhile is the unexpected outcome, the finding of a review of a book published in 1945 by Guy Eden called a "Portrait of Churchill". The source of the review is the Worker, published in Brisbane on 29 October 1945, describing the book as "the latest and most fulsome of these panegyrics" that "purports to be a biography". "For far-fetched flights of fantasy", it adds, "it beats superman".

Although Winston Churchill is now out of office, the review continues, his barrackers are still busily engaged in building up legends of "Winnie the War-Winner". "Alone he did it", they cry. "He won the war single handed". Not since Bill Adams won the Battle of Waterloo all on his own, has so much been claimed for one man.

Most interestingly, deep within the review we are then told that the most impudent claim in Eden's book is that Churchill and his wife "worked out a plan" for giving Londoners safe and fairly comfortable air raid shelters in the railway tube stations.

This is entirely false, it says – as Douglas Reed (who was there at the time) points out in his book, "A Prophet at Home". The Chamberlain-Churchill Tory Government did nothing for the bombed Londoners beyond providing flimsy surface shelters.

We are then told that it was not until Labour Ministers entered the Government that "a plan was worked out" for providing two million bunks, and a system of booking them, in the tube stations. Two Labour Ministers — Herbert Morrison (Home Secretary and Minister for Home Security) and Miss Ellen Wilkinson — were responsible for the plan. All that Churchill had to do with the plan was approve it.

Still, in spite of the facts, the review concludes, the Churchill myths are being fostered and elaborated by interested parties of the Tory persuasion.

It will, it says, be Miss Wilkinson's duty to see that the true story of the war, and not the Tory fiction, is told in the British school text books; otherwise the rising generation will grow up in the belief that "Winnie the War-Winner" was a kind of demigod instead of a well-meaning old gentleman, rather self -conceited, and with a gift of bombast.

Clearly, Miss Wilkinson, who had been appointed education minister in the Attlee government, failed in her duty. The "Tory fiction" has become the received wisdom.

Remarkably though, Douglas Reed (latterly expunged from history for his "anti-Semitism") has his book, referred to in the review, published in its entirety on the internet and we have but have to go to pages 197 to 199 for the antidote to the Eden hagiography. Having explored the failure to furnish suitable shelters, and the "insuperable difficulties" in providing them, Reed tells us:


But nothing ever betrayed more vividly the total lack of understanding of the people's mind that prevailed in the haunts of officialdom. First and foremost, these harassed East Enders wanted to be quite safe, and they knew they could only find complete safety deep underground.

But apart from that, they wanted, if they were to take shelter at nights for months and years, to be able to sleep, and in those surface shelters the noise would not let you sleep. Apart from that again, they wanted, and had a right to, some minimum degree of comfort, and in these dark and narrow surface-dungeons, which the devil himself might have invented, there was no hope of any.

So, that day, we saw appalling sights. Though it was early morning, long queues of miserable people, clutching shapeless bundles, shivering in the rain, stood at the entrances to the underground stations, waiting for nightfall, when they would stream down into them.

The police, the world-famed London police ('Your police are marvellous!'), had been given no better task to do, in this, London's greatest ordeal since the Plague and the Great Fire, than to stop them from entering. But that was vain.

When night came the people bought the cheapest ticket they could and just stormed the stations. Nothing could have stopped them. Good, that the attempt was never more than half-heartedly made. The "insuperable difficulties" were quickly overcome.

Nothing survives in any of the official records that I have seen. But here again, we have confirmation of the accounts I record in The Many Not The Few that in the early days of the Blitz, police prevented people taking shelter in the Underground.

But what is also glossed over is that, when people were forced to make their own provision, in the absence of government planning, the conditions were appalling. Writes Reed, his book published in 1941:


For long enough, the scenes in these underground dens were beyond description by pen or portrayal by brush. A man might have put his hand over his eyes, rather than contemplate them. People lay huddled together, tiny children in their midst, on the platforms, under the railway arches, in the vaults. There was no food for them, unless some local priest militant foraged and found some and brought it to them. There was no heat or water. There was no place for them to relieve themselves in decency. There was no care for their health. Pestilence immediately began to crawl about and breed.

After the War, Churchill wrote in his own book, "Their Finest Hour", that he had been "deeply anxious about the life of the people in London". But not only do the War Cabinet minutes not support his claims, this review and the Reed book add to the already substantial evidence that the people of London were initially left to fend for themselves. "True, we were 'all in the front line' in this war", said Reed, "but the English front line had its first, second and third class compartments, like the English railways".

So it was then – and to a very great extent, so it is now. And government is not and never has been an organisation on which you can safely rely, any more than you can rely on the record telling you the truth of what happened, or is currently going on.