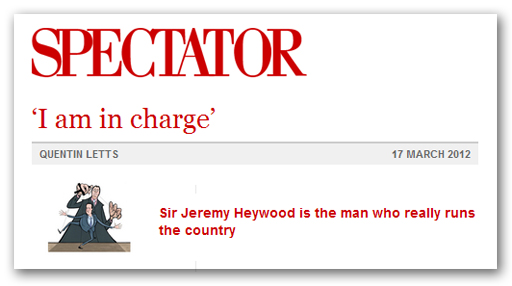 Slowly, hesitantly, and with some diffidence, the hacks, high and low, are beginning to realise that something is wrong. First, there is Quentin Letts in The Spectator, charting the rise and rise of Jeremy Heywood, "the man who really runs the country".

Then there is the Great Charles Moore, who declares that the "civil servants are the masters now", complaining that "our democracy suffers" as a result.

Actually, they are both wrong. How can Heywood, or anyone in this administration be "in charge" when so much of government has been outsourced to Brussels? In truth, no one is actually in charge – and that is the problem. Government has become so amorphous, so diffuse, spread between so many different agencies – local, regional, national, and international – that there is no discernible chain of command. And, without that, there is no accountability and no one assumes responsibility when things go wrong, as they so often do.

It is a bit rich, however, for the likes of Moore, to complain about the loss of democracy. We have never really had one in this country.

The real complaint from these "above the liners" – one higher than the other – therefore, is that the old order (of which they are part) has been degraded. The previous structures no longer exist. Thus, the politicians of old, who held some semblance of power, are no more, and the old "establishment" no longer calls the shots.

But none of these people, neither Moore nor Letts, nor the rest of the bubble, have any real idea of what is going on. All they can understand is that they and their ilk no longer have it, and thus assume that it must have gone to the next in line, the civil servants. While Witterings from Witney can see what is happening, these great sages are struggling.

As reality nevertheless begins to filter through, Letts does make one very pertinent observation: "Much though we mock the Greeks and Italians for being run by unelected technocrats", he writes, "can we truthfully say that we are any better?"

The answer, as they say, is in the negative. Not better … different, perhaps, but not better.