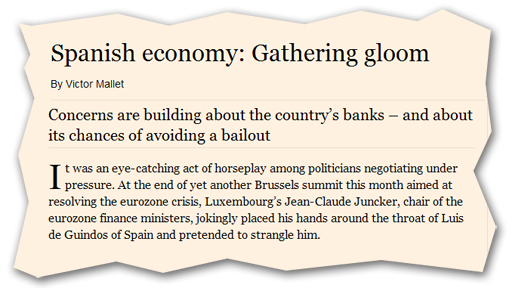 Having seen off the Greeks, for the moment, and lined up Portugal for execution, now it's Spain's turn. Confidence is already starting to evaporate, we are told. A growing chorus of economists and analysts is warning that the Spanish economy – the eurozone's biggest after Germany, France and Italy – is in much worse shape than markets might suggest.

Of that, we have no doubt. I've always been dubious about the Spanish economy and am convinced that it has more than its share of funny money. But doom we were predicting back in 2008, and it still isn't happening. Four years ago, I wrote, " … whether we are any closer to a denoument is, as always, anyone's guess".

It still is anyone's guess. But by the time it does happen, we will all be dead from boredom. We just can't keep up the dread factor any more.