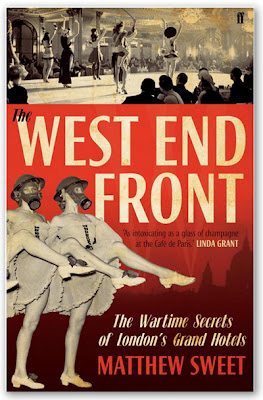 Mentioned recently in the forum was the book The West End Front, which seems to raise some interesting points about the events of the London Blitz, and which take us further in understanding the period – and thus the politics of our own time.

Written by Matthew Sweet, author and broadcaster, and formerly film and television critic for the Independent on Sunday, the book is nevertheless muddled. Ostensibly about the role of London's grand hotels during the Blitz, it actually covers much more gound, creeping into the East End and beyond. Its author thus conveys the impression that he doesn't really know where he wants to be, and never gets down to the detail needed satisfactorily to explore the issues he raises.

That said, the book covers some of the ground travelled by The Many Not The Few, and the forum comment suggests it contradicts events which I have rehearsed relating to the brief occupation of the Savoy by protestors on 14 September 1940, led by Communist councillor Phil Piratin.

Initially, I thought Sweet's treatment of this event was worth only a brief comment, as the original information comes not directly from the book but from two reviews, one in The Daily Mail and the other in the Spectator. Futher investigation, however, suggested otherwise, as the book has more depth than their rather lightweight reviews would suggest.

The reviews, in fact, do Sweet no favours. Having read them, I was quite prepared to savage his work, as the accounts – which are apparently based on the book - are on the face of it fundamentally wrong. They both imply, without the qualifications that Sweet offers, that the Savoy protestors were allowed to stay overnight at the hotel. This does not accord with anything I found about the incident.

According to all the records I studied, they enjoyed tea and slices of bread and butter in the basement, departing when the "all clear" sounded after what was a very short raid.

This may be a very small detail, but it is on such discrepancies that new discoveries often turn, and they have value in aiding an assessment of those who depart from the received accounts. In this case, it turns out that Sweet's discussion on this particular issue is quite interesting as he introduces elements of contention in a small but important way.

For his contentious view, Matthew Sweet relies on an interview with Max Levitas then a nonagenarian. The date of the interview isn't specified in the text but Levitas died in 2001 – ten years before the book was published. And upon the evidence of this one man, contemporary records are apparently revised.

What is interesting though is the excessive reliance on oral evidence and the effect of "prestige". Sweet lists, evidently with great pride, the high and the mighty he himself has interviewed, and is thus prepared to elevate his "oral history" over and above the documented records. His "prestige" as an author, and that of his subjects, are then deemed sufficient to authenticate the material. Verifiable fact seems no longer the dominant requirement.

This is then linked with the "I was there syndrome", where eye-witness accounts are given preference over documentation. This is despite the known falibility of eye-witnesses, especially when they are offering recollections made some time after the event. Thus, because Levitas was "there", his account is given great prominence, even though it is offered sixty years after the event.

To be fair, though, it is his reviewers who seem to elevate the Levitas account to the status of fact, because Sweet does rely for some of his detail on other witnesses, and account, including the principle witness in the Savoy affair, Phil Piratin. He writes of it at length in his book Our Flag Stays Red, published in 1948, the year I was born. Clearly, of the events in 1940, he was also there – I was not even born.

Yet, in recalling other events of that period, the eye-witness is wrong. Three days after the Savoy incident (which would be on 17 September), Piratin tells us that "preparations were made to break open the gates of the Tubes which the police were closing immediately after the air-raid siren had sounded", which is fair enough, and he then continues:


At a number of stations, these actions were taken. Various implements such as crowbars happened to be available, and while the police stood on duty guarding the gates, they were very quickly swept aside by the crowds, the crowbars brought into action, and the people went down. That night tens of thousands sprawled on the Tube platforms.

Of the forcing of the Tube gates, there is no independent corroboration but, if we let that pass, our eye-witness then claims: "The next day (this would be the 18 September) Mr Herbert Morrison, solemn as an owl, rose to make his world-shattering announcement; the Government had reconsidered its opinion in the matter of the Tubes being used as shelters. From now onwards, they would be so employed".

There, of course, is the lacuna. Herbert Morrison was not in any way involved. At the time, he was minister of supply and was not appointed Home Secretary until 3 October. He could not and did not make such an announcement. In fact, no such announcement was made. The timeline was much more convoluted.

Picking up from my piece yesterday, where we see good evidence of the tube station under construction at Bethnal Green being stormed on 9 September, we then have the occupation of the Savoy on Saturday 14 September. Then, crucially, we have a War Cabinet meeting on the Monday – that is the 16th.

Sweet actually refers to this meeting, but he puts it on Tuesday the 17th, a significant error as Churchill takes the first available opportunity to raise it in cabinet, indicative of the importance he is giving the issue. Incidentally, the minute (reproduced above) confirms the prime minister has learned of the event from the press. The official Met Police war diary is silent.

What we then see is very far from a conciliatory response. Churchill effectively instructs Home Secretary John Anderson "to take strong action to prevent demonstrations of this kind", a phrase which Sweet interpets as a eupemism for state violence.

Despite this, Sweet seems to allow Piratin and his Stepney Communist to take credit for forcing a change of shelter policy, ignoring his own research which demonstrates that the only Cabinet response to their activities was to agree on what amounted to state violence to prevent further demonstrations.

Thus, this is where the book starts to go badly wrong. While Sweet has Churchill talking about shelters in Cabinet on the 17th, his is in fact addressing the Commons on the war situation, when he makes no mention of the shelter issue. The day after that, the day when Piratin records the cave-in supposedly by Morrison, the Daily Mail has a leading article recalling that Sir John Anderson had rejected deep shelters, going on to say that:


The fact is that the people themselves have adopted a deep shelter policy turning the Underground railway stations into shelters, which is officially prohibited. Once the people are in, however, they cannot be ejected.

In what was remarkably candid criticism, the paper then concludes: "Experience is proving that the policy of Sir John Anderson was mistaken. It is not too late for him to reverse his policy and provide the deep shelters that are urgently needed".

However, on this day, 18 September, a remarkable event occurs. We see in the Metropolitan Police War Diary the brief hand-written note (marked right), under the heading: "Tube Stations as Shelters". It states: "Comms [The Police Commissioner] issued instructions that Tube Stations are to be policed to prevent crowds seeking shelter from inconveniencing the travelling pubic".

Bland though this phrasing is, it actually heralds a major change in police policy. From one of prohibition, with the police barring entry to the tube stations and moving people on if they sought shelter, the policy was now one of official tolerance, allowing people in as long as they did not obstruct travellers.

But it is the next day which shows this to be a bottom-up policy change. Anderson is in the Commons complaining that people are being misled into believing the Tubes were safer. There is no announcement of a change in policy and, in the evening, William Mabane, Anderson's parliamentary secretary, broadcast on the BBC, urging the public not to leave their Anderson shelters for public shelters, saying it deprived others of shelter.

Nothing of this acutally graces Sweet's book, and he has by now abandoned the shelter narrative. Thus he misses the crucial fact that the offiicial policy changed on 21 September. And only then does Churchill finally intervene, sending an "action this day" minute to his permanent secretary, Sir Edward Bridges, asking for a "short report on one sheet of paper" on details of changes necessary to make the Underground system more accessible.

That evening, John (soon to be Lord) Reith, then transport minister, wrote in his diary of a "Silly 'action this day' memo from the PM about Tubes". And "silly" it was. The prime minister was days behind the curve. The changes were already being made.

Then, on 24 September, Mabane – who only days before had been appealing to people to keep out of the tubes, admitted to the Guardian that the shelter policy had "been been guided largely by the conduct of the people in London". He says that although the London Passenger Transport system must be carried on, the fact that people had been using the Tube stations had now been "recognised". 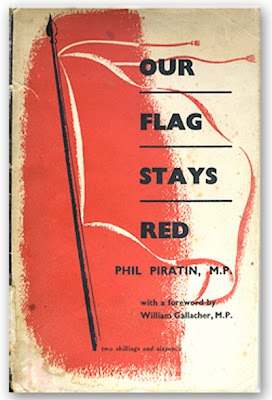 Eight years later, Piratin in his book (illustrated left) crows that the government "… had been forced by the resolute action of the people of London which they had been powerless to prevent". He is right there, even if he is wrong on the detail. Sweet conveys a distorted impression, allowing far too much credit to the Communists, while the key player himself awards the accolade to the people of London.

What does helpfully emerge from Sweet, though, are some more indications as to why the story got so distorted. In my narrative, Morrison is cast as a hero of sorts, the man who actually got a grip of shelter policy, and who then made provision for dfeep shelters.

For the Conservatives, Labour more than the Communists were the electoral threat and praise for Communists at the expense of Morrison could only be advantageous to the Tory cause. Focusing the issue on Morrison also took Anderson and Churchill out of the frame. Overall, a Communist vicotry over Labour was far more appealing than people versus Churchill, with the people coming out on top.

Had Sweet focused on the issues, instead of trying to create what was actually an artefact – the West End Front – he could have come to those conclusions. His research is more thorough than many and there is some genuinely new material in his book, which does add to our knowledge.

The muddle, unfortunately, took over, and not appearing to know what he wanted from the book, Sweet omitted much and perhaps achieved less than was intended. Yet, for all its limitations, the book is worth reading. Some of what it does add is worth having.