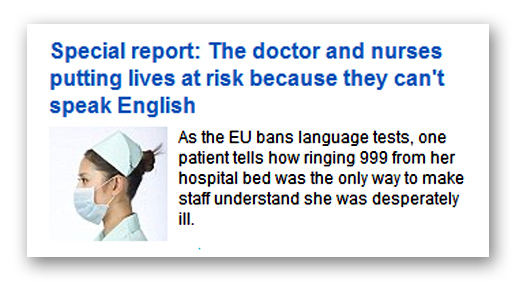 I am beginning to suspect that the "elephant in the room" syndrome which is so apparent in our media arises as much from ignorance and incompetence as it does any conspiracy to conceal the impact of the EU on our lives.

The EU elephant having been ignored on postal charges and the famous pasties, we now have "Exhibit 1" - this piece in the Daily Wail (illustrated above), which retails alarming tales about blunders and near-catastrophes occurring in British hospitals through poor language skills amongst the staff.

Despite its own piece in January (below) telling us that the EU is not directly responsible for such situations whereby nurses end up on the wards with a dangerously limited grasp of English, the paper continues to focus almost exclusively on the EU involvement. 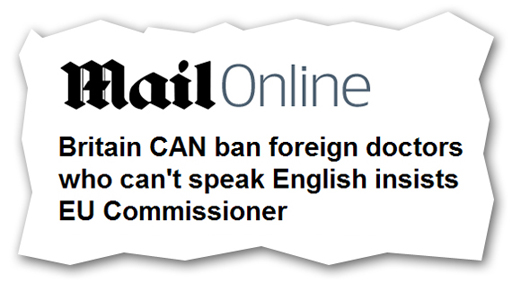 In fact, what the EU did was prevent the European-qualified medical staff being entered on the UK register, merely because they could not speak English. This did not in any way prevent hospitals insisting that staff displayed a specific level of skill – it simply transferred the responsibility from the national registration authorities to the individual employers.

Blaming the EU in this context is perfectly valid, in disrupting established systems and sowing confusion as to where the responsibilities lie, but that is not by any means the full extent of it.

At the end of the line is that group of increasingly highly-paid NHS executives, who are rewarded to such obscene levels supposedly that they should be aware of such matters, and ensure that they are taken into account. Thus, we not only have the EU dimension but multiple failures of management.

Therein, though. lies is another issue. As the military will tell you, if you are incautious enough to ask, to be effective, an organisation should have a clear chain of command.

But, as is the case now, where we have confusion in our legislature, where some laws are made in Whitehall and others in Brussels, it is not surprising that even highly-paid officials – much less the gifted hacks - get it wrong. There is no longer a clarity of purpose and a clear chain of command.

That was the point we were trying to make a couple of weeks ago. When "everybody" is in charge, no one is in charge. Responsibility shared is responsibility diluted, and while the finger of blame is pointed in one direction, others equally culpable get away with it.

Most often though, unlike this case where the EU is taking the rap, the "colleagues" are able to screw up the system, and walk away without blame – no least thanks to the media which no longer understands how we are governed.