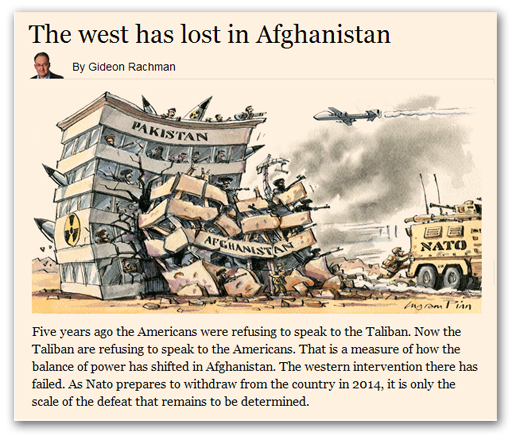 You really have to admire the perspicacity of The Financial Times with its star columnist Gideon Rachman. The west has lost in Afghanistan, he tells us. This is the same Financial Times, I suppose, that told us how wondrous the euro was, and how the UK should be part of it – except this time the paper's columnist has it right. We lost.

He only thing is that, like the US and most of the media establishment, their focus is far too narrow and the timetable is skewed. We lost years ago, and the big problem is the Indian elephant in the room.

But the man says that "it is only the scale of the defeat that remains to be determined" – and there he's right again. The only thing to be worked out now is how it is going to be spun. Everybody seems to agree that there's going to be a civil war, but who is going to take the blame for it?

And then, who really cares? How much do you hear about Iraq these days?