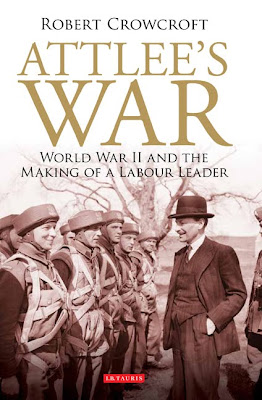 … just got interesting. The whole of the period c.1940-79 is now genuinely a complete historical era. Until quite recently, at least, the 1970s have still felt contemporary, but no longer. This offers both an opportunity and a necessity to rethink the politics of that era.

In the historiography of British politics, the period c.1880-1920 is traditionally the era that has generated extensive paradigm-changing work. But the period that encompasses the Second World War to the rise of Thatcher could become conceptually the most exciting era of modern history.

So writes Robert Crowcroft in Attlee's War, and his sentiment certainly does presage a need to rethink much of that period and to vanquish some of the myths that still abound.

Thus we are told: "It makes sense to begin in 1940 rather than in 1945 as the greater political and cultural changes came between those two dates with the Labour government continuing the work of those years".

And why does that matter?

Well, in the short term, more and more, I find myself unmoved by the MSM agenda, and it thus gets increasingly difficult to post topical, relevant news pieces. We are not, in any event, a news site, and I have never pretended that we could or would slavishly follow the MSM.

Actually, though – even though we disguise it and frequently digress - we remain a campaigning site, and the primary objective is our departure from the European Union. And, above all else, the EU is a creature of history and a captive of it.

It relies on a distorted and fundamentally dishonest narrative, as indeed does the ruling élite of this country. Destroy the myths and re-write the history so that it represents that which actually happened, rather than how those who rule us wish it to be, and you undermine their power base.

That is important. What Peter Oborne thinks about Britain and the US, or Sue Cameron on Clegg's bigger desk, simply isn't. We need to be setting our own agenda, rather than charting the next instalment of the bread and circuses offered in an attempt to keep us distracted.