The wages of wind 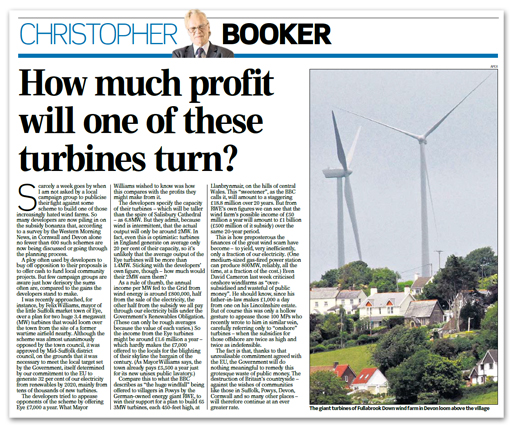 Evidence that we are winning the "climate wars" is not hard to find, in the sense that the balance of the argument is tilting in favour of the sceptics. But, as I have pointed out on numerous occasions, were are dealing with the regulatory aftermath, which is the longest and most damaging phase of a scare.

The effects are not always visible but, sadly, that is not the case with one particular consequence of the global warming scare – the rush to build wind factories. And so it is that Booker this week has chosen to feature the subsidy bonanza that the wind developers are seeking to exploit, often against the wishes of local communities.

But Booker also informs us of a particularly insidious ploy used by developers to buy off opposition to their proposals, offering cash to fund local community projects, as a form of bribe. At first sight, there sometimes look quite generous but few campaign groups are aware just how derisory the sums often are, compared with the gains the developers stand to make.

This is the case with the proposed construction of two 3.4 MW turbines near the Suffolk town of Eye, for which local residents are being offered a bribe of £7,000 a year, yet the income from the Eye turbines might be around £1.6 million a year.

Other so-called "sweeteners" are just as derisory. For instance, the German-owned energy giant RWE is offering to villagers in Powys a staggering £18.8 million over 20 years to win their support for a plan to build 65 3MW turbines. But that wind farm's possible income of £50 million a year will amount to £1 billion (£500 million of it subsidy) over the same 20-year period.

As a rule of thumb, the annual income per MW fed to the Grid from wind energy is around £800,000, half from the sale of the electricity, the other half from the subsidy we all pay through our electricity bills under the Government’s Renewables Obligation. Thus, villagers are being bribed with their own money.

While the absurdity using wind as a means of generating electricity is gradually percolating into the public consciousness, with even some MPs expressing carefully tailored reservations, thanks to the unrealisable commitment agreed with the EU to reduce CO2 emission, now embodied in UK legislation, the government will do nothing meaningful to remedy this grotesque waste of public money.

That is the classic effect of the regulatory aftermath, and a graphic example of how we are winning the battles and losing the war.