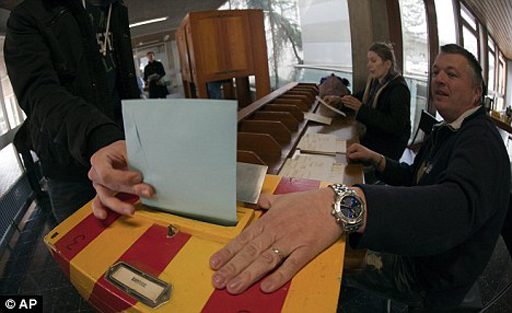 Reuters has a happy little tale about a recent Swiss referendum where voters have rejected an increase in their annual paid holiday over fears it would put their economy at risk. The proposal, initiated by the trade union Travail Suisse, would have brought the mountain nation in line with most other West European countries.

The union had argued that four weeks holiday was insufficient because the pressure of work had increased so much in recent decades, causing rising stress and health problems. But Swiss television reported that the proposal had been rejected by a clear 67 percent of voters.

This is an interesting development as it shows that citizens are prepared to vote for the greater good, against their own immediate personal interests – which augers well for the idea of referism. People are not necessarily going to vote for populist motions.

To an extent, this contradicts the pessimism expressed by Peter Kellner, that we discussed recently, expanded upon by Witterings from Witney. It is Kellner whose opinion polls purport to show that people have no understanding of democracy per se, let alone representative democracy. But whether or not that is the case, there is that elusive "wisdom of the crowds" on which we rely, and which appears to be found in good measure in Switzerland.

Generally, reasons for opposing referendums, though, include the difficulties that can arise when politicians can dictate the issues, the timing of a vote and even the question(s) – and the campaign funding. Those facets can turn an ostensibly democratic exercise into a tool for despots.

On the other hand, with referism, there is a single vote each year, with the timing fixed and the same question asked each year: do you approve the budget – yes or no? Those that would deny the people the chance to answer that question are, it would appear, content to leave it to the tyranny of the whips who ensure that the executive's diktats are passed into law.

But, if the Swiss people can be sensible enough not to damage their own economy on such a manner as holiday allowances, the British people surely are not going to destroy their economy out of perversity.

If you believe in democracy, you have to trust the people. We have nothing else between us than that trust and the elective dictatorship which becomes more tiresome and dangerous with each passing year. Barring violence and revolution, there is no alternative but to give the people more power.