Bring them to book 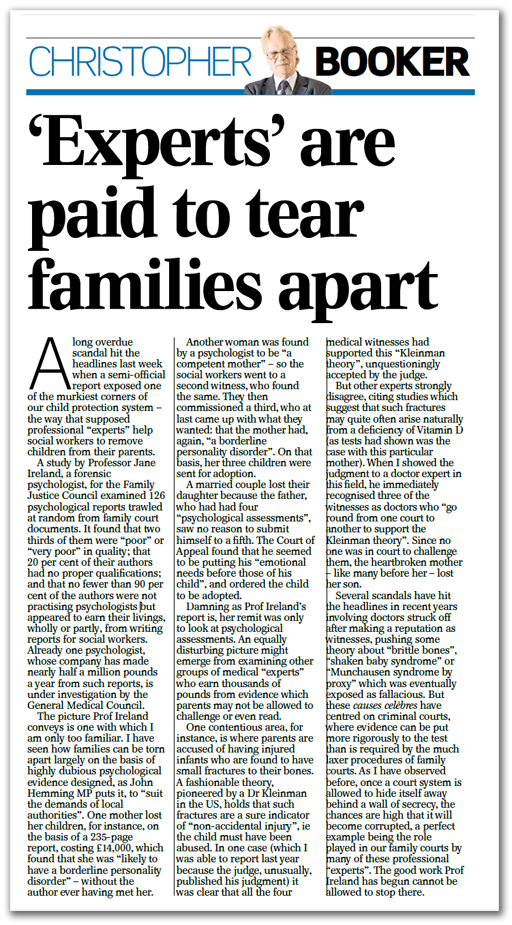 After ploughing a lonely furrow for so long, Booker has finally gained some high profile support on the "stolen kids" issue – not from his own newspaper, which keeps him firmly locked away in the "ghetto", but from The Daily Mail. Much of what this newspaper does is toe-curlingly bad, but just occasionally, it rises to the occasion with a superb piece of journalism which only the Mail can do with such style (headline below).

Furthermore, this is but one of two pieces, The Mail has run, the first dealing with how the family court system is relying on a closed circle of incompetent experts, who are perverting the system in a terrifying way. Thus – at last – is Booker able to remark in today's column that "a long overdue scandal hit the headlines last week". 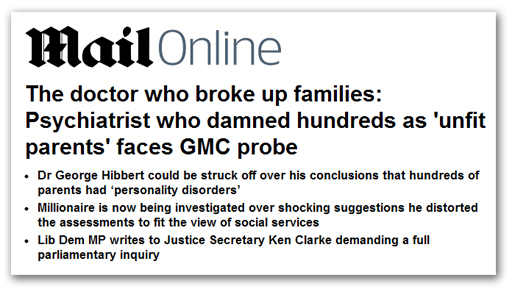 He is referring to a "semi-official report" which has exposed one of the murkiest corners of our child protection system – the way that supposed professional "experts" help social workers to remove children from their parents.

The author is professor Jane Ireland, a forensic psychologist. For the Family Justice Council, she has examined 126 psychological reports trawled at random from family court documents. She found that two thirds of them were "poor" or "very poor" in quality and that 20 percent of their authors had no proper qualifications.

Alarmingly, no fewer than 90 percent of the report authors were not practising psychologists but appeared to earn their livings, wholly or partly, from writing reports for social workers. And, featured in the second Mail piece, one psychologist, whose company has made nearly half a million pounds a year from such reports, is under investigation by the General Medical Council.

The picture prof Ireland conveys, writes Booker, is one with which he is only too familiar. He has seen (and reported) how families can be torn apart largely on the basis of highly dubious psychological evidence.

This is designed, as John Hemming MP puts it, to " suit the demands of local authorities". One mother lost her children, for instance, on the basis of a 235-page report, costing £14,000, which found that she was "likely to have a borderline personality disorder" – without the author ever having met her.

Such seems almost unbelievable – so much so that one is inclined to dismiss it, or mark it down as a tragic exception. This is what children's minister, Tim Loughton, sought to do, when Booker told him what was going on, face-to-face. And, despite the steady trickle of cases that Booker has reported on – only a fraction of those he has seen – the flatulent Loughton has maintained his stance.

Another example, for instance, was a woman found by a psychologist to be a competent mother” – so the social workers went to a second witness, who found the same. They then found one of these "rent-a-psychos" who came up with what they wanted: that the mother had, again, a "borderline personality disorder". On that basis, her three children were sent for adoption.

Then a married couple lost their daughter because the father, who had had four "psychological assessments" from these psycho-frauds, saw no reason to submit himself to a fifth. The Court of Appeal found that he seemed to be putting his "emotional needs before those of his child” " and ordered that the child be adopted.

Damning as Prof Ireland's report is, her remit was only to look at psychological assessments. An equally disturbing picture might emerge from examining other groups of medical "experts" who earn thousands of pounds from evidence which parents may not be allowed to challenge or even read.

One contentious area, for instance, is where parents are accused of having injured infants who are found to have small fractures to their bones. A fashionable theory, pioneered by a Dr Kleinman in the US, holds that such fractures are a sure indicator of "non-accidental injury", i.e., the child must have been abused.

In one case (which Booker was able to report last year because the judge, unusually, published his judgement) it was clear that all the four medical witnesses had supported this "Kleinman theory", unquestioningly accepted by the judge.

But other experts strongly disagree, citing studies which suggest that such fractures may quite often arise naturally from a deficiency of vitamin D (as tests had shown was the case with this particular mother). When Booker showed the judgement to a doctor expert in this field, he immediately recognised three of the witnesses as doctors who "go round from one court to another to support the Kleinman theory".

Sadly, since no one was in court to challenge them, the heartbroken mother – like many before her – lost her son.

What we are going through, of course, is wearyingly familiar. Several scandals have hit the headlines in recent years involving doctors struck off after making a reputation as witnesses, pushing some theory about "brittle bones", "shaken baby syndrome" or "Munchausen syndrome by proxy" which was eventually exposed as fallacious.

But these causes célèbres have centred on criminal courts, where evidence can be put more rigorously to the test than is required by the much laxer procedures of family courts, which allow the incompetence, dishonesty and self-interest to be obscured by a wall of secrecy.

And as Booker has observed before, once a court system is allowed to hide itself away behind that wall of secrecy, the chances are high that it will become corrupted. A perfect example is the role played in our family courts by many of these professional "experts".

Thus, the good work prof Ireland has begun cannot be allowed to stop there, Booker concludes. Perforce though, he is being too gentle. These faux experts can only exist in a system where the judges allow them to operate, where the lawyers support them, and the local authorities pay for them, with our money.

In Booker's conclusion, the hint is there. The whole system is corrupt, from the judges downwards. It needs to be stripped down, taken apart and rebuilt from the ground upwards. And although too much to hope for in a society that is also corrupt, those responsible should also be brought to book.

That, though, is not going to happen, a fact that should be remembered the next time the supposed protector of children, Tim Loughton, seeks re-election. He had the power to challenge the abuse, but sat on his hands and did nothing.