A defence against referendums 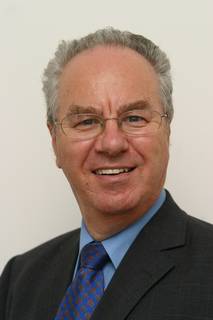 That person was Peter Kellner, husband of EU "foreign minister" Baroness Catherine Ashton - and this is their choice of speaker to tell us about democracy? But then, the Reuters Institute boasts for its advisory board Lord Patten, former EU commissioner, as its chair, and such notables as Alan Rusbridger, Editor in Chief of The Guardian and Mark Thompson, Director-General, BBC. Its director is David Levy, the controller of public policy at the BBC until 2007.

Howsoever, it came to pass that yesterday, the egregious Mr Kellner delivered his lecture, the full text of which is on the Reuters Institute site, entitled "The Second Superpower".

The title came from New York Times writer, Patrick Tyler who in February 2003, one month before the Iraq war, wrote that the huge anti-war demonstrations around the world this weekend were reminders that there may still be two superpowers on the planet: "the United States and world public opinion".

To an extent, the title is a red-herring, because Kellner goes on to say that world public opinion failed to stop the Iraqi war and that, while the eventual impact of people power will be immense, "right now it is still groping for institutional forms that can give it teeth".

Bizarrely though, Kellner did not seek to empower the people – the objective of a functioning democracy. Instead, he came to warn that representative democracy was in trouble, not just in Greece and Italy, or Russia and the United States, but "here in the United Kingdom". He argues that "our very system of democracy is more fragile than we like to think".

Then, says Kellner, representative democracy enjoyed a technical monopoly but now, under the assault of modern technology, mendacious journalism and angry voters, we are "drifting towards a political system" which "will undermine representative democracy". And this is, horror of horrors, direct democracy - with decisions made by the people using referendums.

Thus, very early in his lecture Kellner nails his flag to the mast. He is not there to defend democracy at all, but to protect the status quo - representative democracy, the thing that isn't democracy at all - mounting a defence against that peril of all perils, the referendum .

To perform his task, he decides to frame the "core issue" in terms of legitimacy – whether people accept the principles of representative democracy. He then calls in aid his own polling organisation to inform us that nearly two-thirds of voters (62 percent) believe politicians lie "all the time" and less than a quarter (24 percent) think parliament does a good job debating issues of concern to them.

The biggest handicap though is that voters see MPs as servants of the party leadership, backed by a poll which also showed what people thought MPs should be giving most weight to their views. 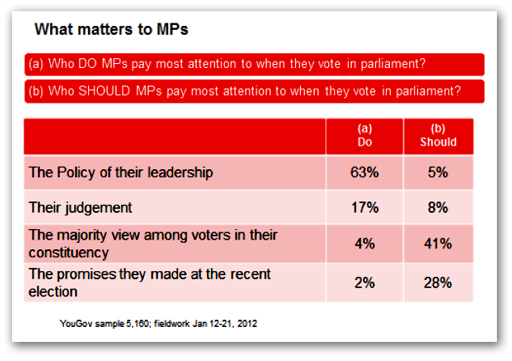 It is because of this, Kellner argues, we see a growing clamour for direct democracy and the use of referendums. And, if a variety of issues were put to the vote, "Referendum Britain" would be a country outside the European Union, with no net immigration, a £1 million maximum pay limit and parents armed with the names and addresses of local paedophiles.

This, clearly, is not acceptable to Mr Kellner – or his backers (and, doubtless, abhorrent to his wife), so the man launches into an attack on the very idea of referendums. And, shorn of its rhetoric, this is what Kellner's lecture is really all about.

To be fair to the man, in identifying the problems with referendums, he makes some good points - not least that politicians, in deciding when, where and on what terms referendums are held, can use them as a tactical device to achieve their own ends.  And with such arguments, he argues against direct democracy in general and their concomitant referendums as the basis for improving democracy.

Instead, Kellner, the pollster, wants better ways of measuring public opinion, and then urges MPs to engage more fully with it. Interestingly, though, he is very far from being the first to make such points. More than seventy years ago, in the pages of Reynolds News, Prof A Berriedale Keith was writing in very much the same terms. Then as now, though, the problem is not so much the measurement of public opinion as getting MPs to take notice of it, and "not humbly to obey the bidding of the whips".

To that problem, Mr Kellner has no answers. Even though he does come up with ideas for improving the measurement of public opinion, he no more than Berriedale Keith, have any ideas as to how MPs can be forced to take note of public opinion. He ends up, therefore, with the incredibly lame suggestion that the public should have confidence in the process by which governments and parliament reach their decisions.

The goal, he suggests, should be neither to surrender to the "second superpower" nor to ignore it, but to show that it is being listened to, seriously and with at least a semi-open mind, so that when MPs vote differently from the way their constituents want, they deserve respect for the way they make up their minds. Referendums, he says, can then be kept for those, hopefully rare, occasions when Parliament gets it totally wrong.

Such is a partial summary, which barely does justice to as lecture that runs to thirteen pages. But what is especially interesting is that Kellner says that, because they misuse them, politicians should be banned from calling referendums. Instead, the public should be given the power to wield a "people's veto" on any Act of Parliament or local council decision by gathering the signatures of ten percent of the electorate on a petition.

But, in coming out with ideas that were, in fact, being rehearsed more than seventy years ago, he does not acknowledge current ideas, particularly the discussions on the blogosphere where there is a healthy debate going on.

And, of course, he does not in any way acknowledge the concept of referism, which offers the ultimate "people's veto" in allowing the people to block the budget. The likes of Kellner are far to grand to sully their precious minds with other people's ideas. Thus, whatever else we have here, this is not a democrat speaking.  This is a man who wants to keep people away from power, and to reinforce the status quo.