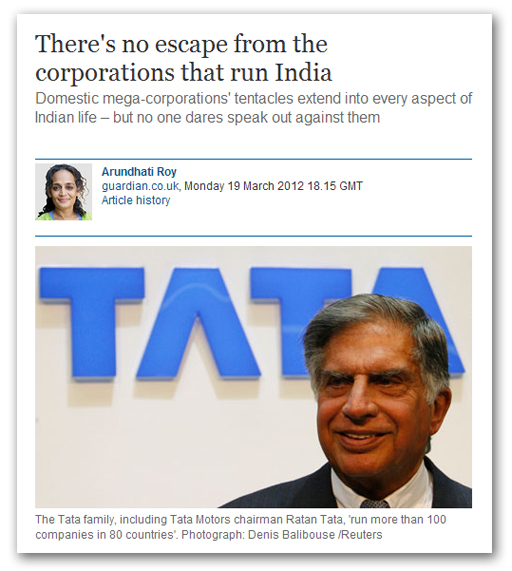 The Guardian in the form of Arundhati Roy is having a big whinge about the corporates and their power in India, remarking that "no one dares speak out against them".

Of course, we did, on several occasions, but when the corporates browbeat the Sunday Telegraph into shutting us down, and extorting its legal fees, the wuzzies were beside themselves with joy, with The Guardian's Moonbat in the vanguard.

But then, as Autonomous Mind remarks, when it comes to hypocrisy, The Guardian takes it to the stratosphere. 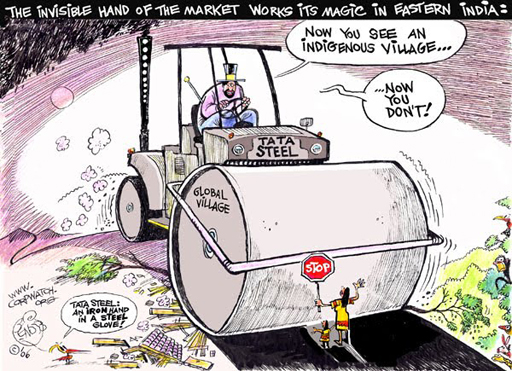 Nevertheless, some of the points made by Arundhati Roy are well made, and deserve to be heard. She expands on them in another piece, highlighting the dirty dealings in Orissa, which is precisely what we did to get ourselves into trouble.

So many times in India, the corporates enlist state forces (and other more sinister operations) to do their work for them, distancing themselves from direct involvement. That way, on the surface at least, they keep their hands clean, while their lawyers work overtime to see off those who complain.

But, if it is the terrible "right-wing" duo of Booker and North who are doing the business, the corporates can do no wrong. You have to be a preferred species before you get a hearing.