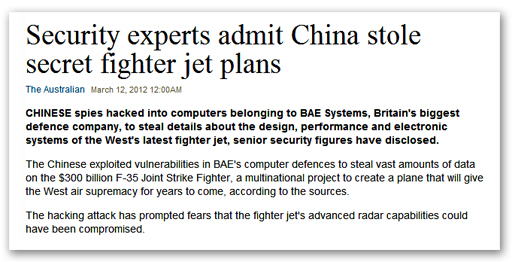 You really don't have to add a great deal more to this, other than to remind ourselves that, in September 2005, with Tony Blair holding the EU presidency, the EU moved towards a China-EU Framework Agreement, in which we and the rest of the EU member states were to become "strategic partners" with China.

You will be pleased to be reminded, also, that Blair and premier Wen Jiabao witnessed the signing of a €500 million loan from the European Investment Bank for the extension of Peking airport and that, during the meeting, a Joint Declaration on Climate Change between China and the EU was issued. This confirmed the establishment of a China-EU partnership on climate change.

The two sides emphasised the importance of high-level political dialogue and consultations at all levels in enhancing understanding, expanding common ground and advancing bilateral relations. And now they steal our secrets, and those of our most important ally.

There is stupidity, and there is a higher form of stupidity, an example of which is to allow the EU to dictate our foreign policy. China may be our trading partners, but they are also our potential enemies. As such, they cannot be treated as our "strategic partners". Except, of course, that they are, and we no longer have any say in the matter.