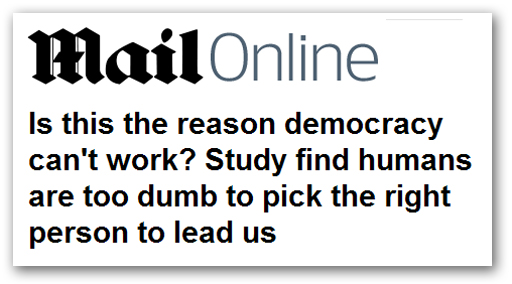 John Toland's "Hitler" has the Führer describing democracy as "an anthill with everyone scurrying in different directions". How ridiculous it would be, he said, to concern the average man with problems that give headaches to better heads.

Imagine, he said, burdening "such a little human worm" with the final decision, for example, of the Rhineland crisis. "What if the Four Year Plan had to be first presented to a democratic parliament?", he asked.

Now, prof David Dunning, reported in The Mail, would seem to agree about the inadequacies of the "little human worm", only he positions the problem as lying with us and the electoral system. The majority of us lack the mental tools needed to make meaningful judgements about the quality of candidates.

Dr Mato Nagel, a sociologist in Germany, recently used this as the basis for simulating a democratic election. In his experiments, candidates whose leadership skills were only slightly better than average always won, leading Nagel to conclude that democracies rarely or never elect the best leaders.

Their advantage over dictatorships or other forms of government is merely that they "effectively prevent lower-than-average candidates from becoming leaders".

Assessing the politicians currently leading the western democracies, and especially our own Boy, it is hard to disagree with this thesis. We enjoy not democracy but a mediocracy.