A tale of two fantasies 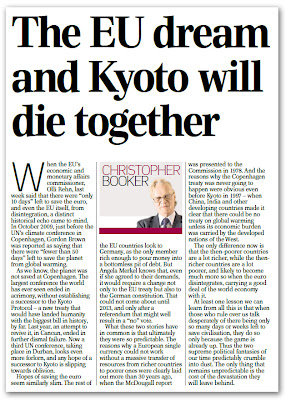 It is by no means the first time that the similarities between global warming and the euro have been noted, the most obvious being that they are both political fantasies without substance.

But, as Booker notes in his column this week, even the rhetoric of decay sounds the same.

When the EU’s economic and monetary affairs commissioner, Olli Rehn, last week said that there were "only 10 days" left to save the euro, and even the EU itself, from disintegration, a distinct historical echo came to mind.

In October 2009, just before the UN's climate conference in Copenhagen, Gordon Brown was reported as saying that there were "fewer than 50 days" left to save the planet from global warming.

As we know, the planet was not saved at Copenhagen. The largest conference the world has ever seen ended in acrimony, without establishing a successor to the Kyoto Protocol – a new treaty that would have landed humanity with the biggest bill in history, by far.

Last year, an attempt to revive it, in Cancun, ended in further dismal failure. Now a third UN conference, taking place in Durban, looks even more forlorn, and any hope of a successor to Kyoto is slipping towards oblivion.

And there is another similarity. Hopes of saving the euro seem similarly slim. The rest of the EU countries look to Germany, as the only member rich enough to pour money into a bottomless pit of debt.

But Angela Merkel knows that, even if she agreed to their demands, it would require a change not only to the EU treaty but also to the German constitution. That could not come about until 2013, and only after a referendum that might well result in a "no" vote.

But, says Booker, what these two stories have in common is that ultimately they were so predictable. The reasons why a European single currency could not work without a massive transfer of resources from richer countries to poorer ones were clearly laid out more than 30 years ago, when the MacDougall report was presented to the Commission in 1978.

And the reasons why the Copenhagen treaty was never going to happen were obvious even before Kyoto in 1997 – when China, India and other developing countries made it clear that there could be no treaty on global warming unless its economic burden was carried by the developed nations of the West.

At least one lesson we can learn from all this is that when those who rule over us talk desperately of there being only so many days or weeks left to save civilisation, they do so only because the game is already up.

Thus the two supreme political fantasies of our time predictably crumble into dust. The only thing that remains unpredictable is the cost of the devastation they will leave behind.

In both cases, though, the costs and disruption are likely to be substantial, and there is one other commonality, to which Booker did not refer, not having the space. And that is that the perpetrators of both scams will walk away scot-free, leaving others to pick up the pieces and suffer the hardship.

One would like to think there will be a day of reckoning, but short of a revolution, when the tumbrels take to the streets, this remains a dream. However, at least in our life-times, we have realistic expectations of seeing the not one but two fantasies collapse – and that is some small compensation.