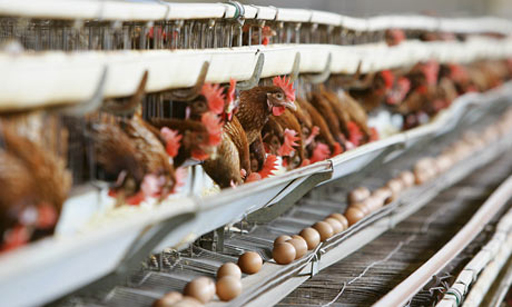 The picture above is no more in the UK. More than 80 million battery hen spaces have been upgraded as a result of EU law. Almost all British egg producers will be compliant with the law that comes into force on 1 January. Others are not.

Spain, France, Poland, amongst others – eight in total, including Belgium - are not ready, and will continue producing eggs from battery cages, despite having had 13 years to prepare for the new law, one which introduces standards the British would have adopted, with or without the EU.

This, says the Independent, has led to fears that cheaper, illegal eggs from the Continent will flood into UK wholesalers, manufacturers and caterers – undercutting British egg producers, who say they feel "let down" by the Government's refusal to unilaterally ban eggs from non-compliant EU states.

These eggs are not going to be on sale in supermarkets, but will feed the processing trade, where they will form ingredients of made-up foods, the source unidentified.

Such is the structure of the egg trade, with perilously narrow margins, that processing eggs often comprise the profit in a business that often just breaks even on its core production, or even delivers at a loss.

When it comes to regulation, therefore, producers are reliant on uniformity of misery – every competitive country being treated the same. When some major competitors are unencumbered, this can have a disastrous impact on business.

Yet, despite the importance of this issue, the EU is once again found wanting. No doubt the commission will suggest that it needs more enforcement powers, the doctrine of "more Europe" being the answer to every problem.

But a cheaper, quicker and more effective answer is for compliant countries to ban non-compliant produce. But that, under EU law, is not allowed, thus penalising countries which obey the law. Which is yet another reason why we must leave the EU.