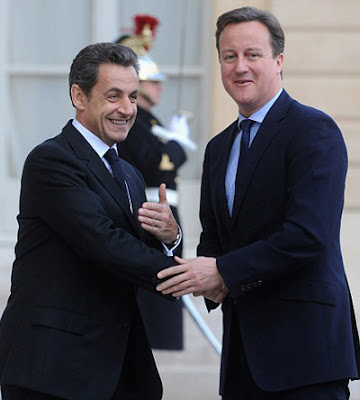 Twenty-four hours after the event, I am still puzzling over what to make of The Boy's visit to Paris, ostensibly to meet Sarkozy for a lunch date.

For sure, it was a long-standing appointment, but that was for talks on further defence co-operation (where Cameron was, no doubt, up to no good), but this was rescheduled in view of the euro crisis, and replaced by a much shorter working lunch.

If we came away with the impression that The Boy had been sidelined, we would share the sentiment with the Daily Mail, which headlined precisely that.

The prime minister insisted he is a "big player" despite accusations that Britain has been sidelined and "bounced" by Berlin and Paris into accepting sweeping changes to European treaties, said the paper – a not altogether reliable analysis which assumes that Berlin and Paris are of one mind – which they are not.

The Independent was not much help either, displaying the irritating habit of British papers of "putting a union jack on the story", putting Cameron at the centre of the action, assuming that is what British readers need in order to take an interest in the story.

Mind you, this newspaper is not the only one in talking down to its audience. The European leaders in general speak in adult terms, but Cameron chooses to use childish illustrations, describing intervention in terms of a "big bazooka", the only leader to patronise his audience thus.

Purveyor to the chatterati of court gossip, Peter Oborne, has a different take on this, arguing that the meeting "could not have been more fraught with consequence".

He writes that many of the issues they discussed – financial regulation, obscure treaty changes, bail-out mechanisms – may have seemed almost comically small considering the magnitude of events. But underlying their discussion, one great question hung in the air. Would Britain smile on France and Germany entering into what Brussels officials are calling a "Grand Bargain" to save the euro?

To achieve this, given the length of the meeting, the pair must have needed relays of translators, with the pair sounding like Donald Duck on helium, so fast must they have been speaking. But then logic was never Oborne's strong suit. I doubt very much whether Sarkozy cares much whether Great Britain "smiles" or not. One suspects that he is more concerned that Cameron should not get in the way of the grown-ups.

However, Oborne does "reveal" - as hacks do in that pretentious way of theirs – that Cameron is facing overwhelming behind the scenes pressure from Obama and his Treasury Secretary Timothy Geithner, to throw Britain’s weight behind the rescue package being hammered together by France and Germany to pull Europe back from the abyss.

This again does not compute though – someone is misreading the signals. As we pointed out earlier, Merkel and Sarkozy are not singing from the same hymn sheet. If there is a plan, it does not exist yet, and there is a long way to go before Berlin and Paris agree – if ever.

And that is the paradox. If Cameron is the useless appendage that so many of us think he is, why did Sarkozy meet him, instead of cancelling the meeting outright? Or did he concede to the briefest possible exchange, to give Cameron a chance to do a bit of grandstanding, and play to his domestic audience, with grandiose statements about looking after the national interest?

In truth, we really do not know – which possibly explains why we are getting so many different explanations for the meeting, some of which are frankly impossible. The only sure thing is that Monday's meeting between Merkel and Sarkozy will be far more important, although even after that we may be none the wiser as to what is really going on.