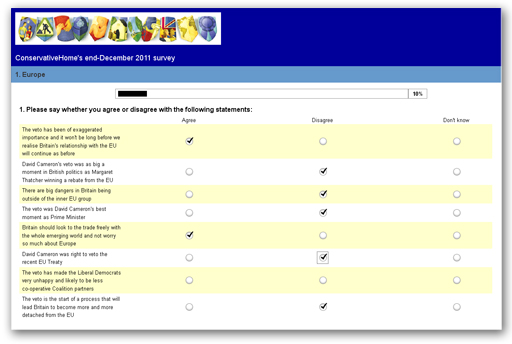 You can ignore EUReferendum – a lot of people do. But you then have to ignore Booker, Hitchens, and even Hansard and sundry others, if you want to stay unaware of the simple fact that Cameron did not cast a veto on a treaty or anything else at the European Council on the night of 8/9 December.

Such is the ostrich-like behaviour of Tory Boy Blog which for its end of year survey of "Tory" opinion, asks all-comers to comment on such delights as: "The veto has been of exaggerated importance and it won't be long before we realise Britain's relationship with the EU will continue as before".

"Do you think David Cameron was right to veto the recent EU Treaty?", it asks. "Was David Cameron's veto as big a moment in British politics as Margaret Thatcher winning a rebate from the EU?", it wants to know, then inquiring: "Was the veto was David Cameron's best moment as prime minister?".

This is fantasy politics being played out at an advanced level. Such is their desperation to endorse and then conform with the fictional narrative that the CH editors have quite deliberately set their minds against acknowledging reality, and have retreated to their own world of fantasy politics.

These people are no longer serious players. They may have their following amongst those who can't deal with reality, and actually prefer fantasy politics, but as commentators they are on a par with the MSM, having lost the ability to distinguish between the real and the make-believe.

One will, nevertheless, enjoy the result, although it will be difficult to distinguish between the true responses and the irony. After all, given his lack-lustre performance to date, who is to say that the "veto" was not David Cameron's best moment as prime minister?