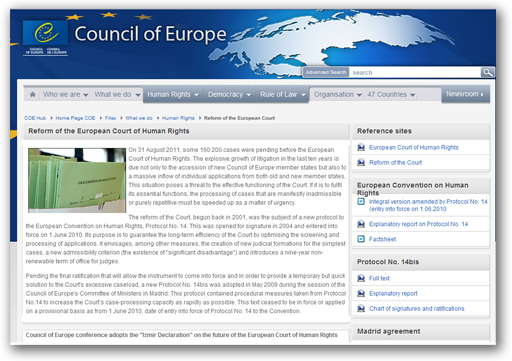 On the basis of a supposed "leak" from the Foreign and Commonwealth Office (FCO) to the Sunday Times, most newspapers today are hyperventilating about the Convention of Human Rights and the behaviour of the court in Strasbourg, announcing that the UK is variously "pushing for" or "demanding" reforms.

Buying almost completely into the FCO spin, the babies of the Fourth Estate breathlessly announce the government will "do such things", all in the name of curbing the powers of the errant court – thus demonstrating that Her Majesty's Government is still in control, and giving those foreign Johnnies what for.

However, not one of the babies seems to have checked with the Court itself, or its sponsoring organisation the Council of Europe. Although these organisations are closed down for the Christmas break – which is why, presumably, the FCO leaked the story now, when there were no court or Council press spokesman around – their websites are up and running, and give the background to a story which is very different from what is presented.

The Grauniad has the headline "Ministers to urge changes to European court of human rights", with the quite bizarre strap, "Britain has recently taken over control of the Strasbourg based court that rules on human rights within its 47 member states".

This paper is telling us that "Ministers will this year push for changes to be made to the functioning of the European court of human rights or could defy the more controversial of its rulings that have included the decision to give prisoners the vote".

The Daily Wail, is even more strident, declaring: "Ministers 'will defy meddling EU over votes for prisoners'" (later changed to "Europe" after it realised its mistake), asserting that the Foreign Office has drawn up blueprint to reform European Court of Human Rights and that Britain has Switzerland’s support in its campaign to 'address growing public and political concern'.

All this is focused on ministers who "are preparing to defy Europe over its insistence that Britain gives prisoners the right to vote", hence we are told (by the Foreign Office) that the Foreign Office "has drawn up a blueprint to reform the European Court of Human Rights, aiming to win back power for national governments".

The pièce de résistance, though, comes from the Independent, which headlines: "Ministers' secret plan to stop Europe 'meddling'", with the legend that: "The Government has warned that it may defy the ruling by the European Court of Human Rights that prisoners in UK jails should be allowed to vote in general elections".

What makes the these reports utter b******s, though, is that the FCO-inspired story refers to changes that are being negotiated through the system and are part of an ongoing process of "reform" that has been going on since 2009 and before. Thus, the "secret plan" is so unsecret that one can see elements of it on the Council of Europe website. So routine is this, in fact, is that the court itself has its own specific pages on "reform".

What is happening here, therefore, is that the FCO spinmeisters are taking advantage of the shortage of hard news over the holiday period, to get their agenda into the frame.

The motivation is obvious. With hostile stories frequently in the media on the court of human rights, the administration is presenting itself as taking action, and reasserting control at a time when the papers are desperate for news, and will print almost anything. It is thus talking up minor administrative changes in the court system, and claiming credit for work in progress, then "leaking" them to a gullible media.

Look to the Interlaken Declaration last year, though, and one sees the "action plan" was already agreed in the dying days of the last Labour administration, to which effect, work is proceeding apace.

It is this to which our government is now reduced – spinning developments to give the impression that it is still in charge, in an attempt to conceal quite how emasculated our ministers have become. And the babies of the MSM fall for it every time.