First, there was this (above), based on a report in January 2007, when the "European Commissioner for Competition Policy" decided to get stroppy. Last year, sharp-eyed observers might also have noted the EU commission statement which said:


Credit card fees have been the subject of extensive investigations. The Commission is currently coordinating the efforts of the national authorities in charge of airline price transparency. In addition, a reflection is ongoing on the impact of the introduction of the Single Euro Payment Area (SEPA) tools on cards, including the possible solutions to the potential problems determined by this process.

Then, of course, we have the Payments Services Directive, adopted in 2007 and coming into force in 2009, with certain provisions held over until 2012.

Although these do not deal directly with credit card fees, the writing is on the wall, with the EU commission putting pressure on the banks. Statutory action under SEPA is only a matter of time, and the Consumer Rights Directive is already in force, which will ban businesses in many sectors, including airlines, from imposing above-cost surcharges on payments from mid-2014. 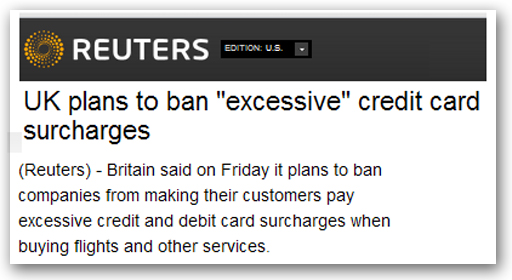 And then, out of the blue, we get this - although this report does mention the EU dimension. Not so, in some of the popular press, such us the Failygraph, which has Tresury (sic) minister Mark Hoban making the announcement, with narry a mention of our supreme government.

However, the Evening Standard gives the game away, reporting that: "There is disagreement between ministers and Labour over whether the Government or the EU should take the credit for this move. Consumers will not much care: this is a long-overdue reform".

But, with the EU commission in on the act in 2007, long before this current administration took office, with it "coordinating the efforts of the national authorities" and with EU legislation in place, and more to follow, it takes little imagination to work out who is running the agenda here. Once again, we have an administration in office moving to anticipate EU legislation, and thus foster the myth that it is still in charge.

How pathetic it is though that some newspapers cannot bear to admit who is really running the show.