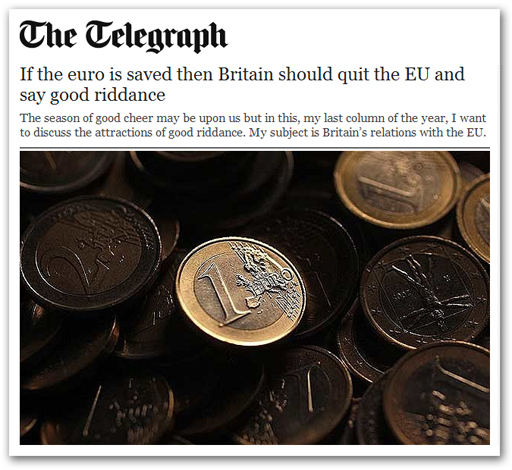 Ask an economist for his opinion on why we joined the Common Market and you will get the ill-informed dogma that Roger Bootle delivers in the Failygraph. But then I suppose he feels the same way about bloggers writing about economics, although being so grand it is unlikely that he actually reads anything other than the cloggers of his own newspaper.

That notwithstanding, he offers the usual mantras, arguing as to the reasons which we joined that, from a state of devastation, the countries of continental Europe advanced rapidly. By contrast, he writes, the non–European world, in which we had played out so much of our history, seemed like a backwater. Add in a dose of Britain's imagined cultural inferiority and a smidgeon of Vorsprung Durch Technik and you have the explanation, says the brave Bootle.

This pastiche does not get close. Not least, Heath knew full well what he was doing - that the Common Market was the precursor to political union. He took Britain into the then European Economic Community (EEC) in the full expectation that it would transform itself into a political community. Why he did so is a long and complex story, but not one that Bootle gets near.

The bigger story, however, cannot be complete without recognition of the dominance of the unions in British industry at the time of our entry to the EEC, and the inability of British management to deal with them. It was thought (wrongly) that exposing industry to competition through the Common Market (as only the British insisted on calling it), that this would help check the power of the unions. It didn't ... Thatch eventually had to do that - but that is another story.

Why we remain in the EU is also a much more complex story, one that Bootle addresses, suggesting that this is dictated by three serious economic delusions: "top table syndrome, sizism, and proximity fetishism". In explaining these, he manages to pad out his column, thereby collecting his fee, but I would venture that Bootle's explanation is not only grossly superficial, but largely wrong, not least in neglecting far more important reasons.

Understanding the dynamics of our membership, and the reasons why there are such strong constituencies which continue to support our membership, is an important part of any campaign for our withdrawal. And the one thing you cannot do is attribute the status quo to economic reasons, when we are talking about membership of a political club.

And, of course, the primary (and most powerful) supporters of our continued membership are the politicians themselves, particularly those running the administration, who realise full well the convenience of having a technically competent and highly productive legislature in Brussels. This takes much of the donkey work out of government, freeing the national parliaments to play politics instead of the jobs they used to do. With Brussels producing the bulk of the laws for the member states, that frees up the politicians to go out and play. That is what they do, and they like it that way.

But, without doubt, the primary driver is inertia. With anything up to 80 percent of our economic and administrative law made in Brussels, and many of the administrative systems run from there, the sheer enormity of re-writing 90,000-plus pages of legislation, and rebuilding all the administrative structures that have been outsourced to Brussels, is not something that any sensible civil service would embrace with enthusiasm.

As far as industry goes, it is not surprising that corporatists such as Richard Branson love the EU. The regulatory ramp is one big business loves, and can deal with. It disadvantages small and medium-sized enterprises which find it harder and relatively more expensive to comply. Big corporate business loves red tape, and Brussels provides it by the ton.

Then, of course, there are the legions of administrators, NGOs and other parasites, who gain their living from the corporist state represented and supported by the EU, and which can be manipulated to provide a never-ending torrent of legislation (and enforcement fees), to keep any number of idle mouths fully stuffed.

This means, unfortunately, that the EU can boast a huge payroll vote, leaving only a relatively small (and disorganised) constituency that actually wants to leave the EU – as opposed to renegotiation, changing slightly the balance of power.

If we are to prevail in a campaign to rid ourselves of this incubus, then we must understand what makes it tick, and how to address the "dog-whistle" issues that will build a majority for withdrawal. But don't look to Bootle – even if he seems well-motivated. All he and his colleagues are really interested in is filling space and taking home their fees.

If the wind changes, they will change. They are fickle friends who cannot be trusted. More to the point in this context, don't ask an economist for history lessons. You will get what you deserve.