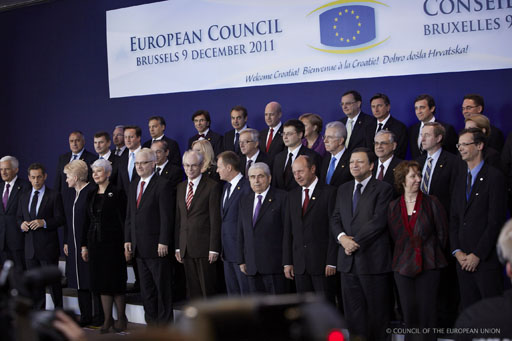 It does look as if the man masquerading as our prime minister has form on the matter of inventing narratives to go with his European Council appearances. As my erstwhile co-editor reminds me, he pulled a similar stunt in November last year, when he invented a wholly fictitious joust to cover his embarrassment over the EU budget, claiming to have won a famous victory.

Yet, despite his account of his derring-do, no independent corroboration of his sterling deeds could be found in the Council conclusions, while - under robust questioning, his story does not stand up.

We have to remind ourselves that, apart from Cameron's own account his own fearless deeds at the current European Council, there is no independent account, and by convention, other heads of state and government do not interfere with or contradict statements made by individual members to their own domestic audiences.

I do recall, however, once going through the different press statements made by the participants to their nation press corps, marvelling at how many different meetings had been conducted simultaneously, each bearing absolutely no relation to each other. Nevertheless, we have absolute trust in everything our politicians tell us.

Yet, despite that, we (my erstwhile co-editor included) are not the only ones uncharitable enough to smell a rat. In addition to Alex Massie, Mary Ellen Synon also has her doubts about that has been going on in Brussels.

She, of course, was actually "there" covering the European Council, but it has to be said that "being there" is not necessarily an advantage. It means being corralled in the press room and general environs of Justus Lipsius (the Council building), bored witless most of the time.

At best, one picks up tiny tidbits from passing leakers (and pretenders), from door-stepping politicians and officials heading in and out of the building, and the infrequent and generally uninformative press conferences. From experience, one finds that it is better standing back, watching the multi-national TV coverage, reading the wire reports and the constant flow of drivel from the bored hacks, and relying on one's own sources to fill in the details.

Having a good knowledge of the procedures helps enormously, allowing one to distinguish more easily between the fiction (which simply could not happen) and the reality, which is very often much duller and rarely suitable for publication.

Nevertheless, despite the handicap of "being there" – and imbibing some of the nonsense pervading the building – Mary Ellen notes that Cameron got exactly what he wanted from the European Council.

He flies over as the Brussels poodle, always ready to do the bidding of the "colleagues", and – at the shake of a "veto" - comes back the conquering hero, the eurosceptics scattering rose petals in his path.

This is all just a little too pat, and while the gullible hacks might lap it up, that is no reason for the rest of us to throw natural scepticism to the wind, and buy into The Boy's narrative. Even if you accept his fairy tale, an objective assessment would suggest that he has achieved very little - a view with which Witterings from Witney readily concurs.

But it does not take rocket science to work out that the current narrative suits an awful lot of people, including the "colleagues" who can get on with producing their treaty, unhindered by the presence of querulous (or even emollient) British officials, aided by the bogeyman from Britain to act as a unifying force.

Currently at 26-1, never in recent times has "Europe" been so united ((or not, as Raedald observes). Nevertheless, there is a closing of ranks against the interloper who tried to rain on their parade. How so very convenient it all is, even if people are rather wary. After all, no one believes a word they read in the newspapers, do they?

Aren't we all far too sophisticated and worldly-wise to allow that to happen?