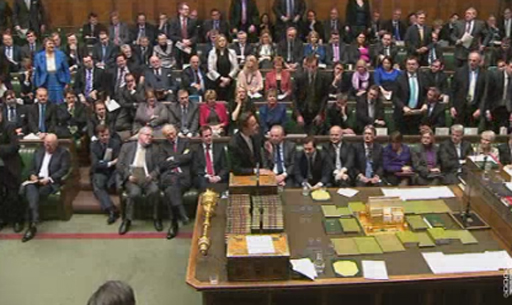 "Conservative leader Cameron said he 'made no apologies' for vetoing a new treaty at a eurozone crisis summit last week, a move which led to the other 26 European Union nations making an agreement without Britain". That is an extract from an AFP report on today's PMQs.

Yet, this is not even close to what he actually said, his verbatim remark retailed further down in the same report. Asked by Ed Miliband whether, in relation to the European Council, the "sensible thing for him (Cameron) to do to re-enter the negotiations and try to get a better deal for Britain", Cameron replied: "I make no apologies for standing up for Britain".

Thus, the veto was not mentioned. In the entire exchange, there was no mention of the veto. Not to be outdone, though, the Failygraph repeated the canard, thus maintaining its reputation for accuracy and objectivity, declaring: "During PMQs earlier today David Cameron insisted he would make no apology for 'standing up for Britain' by deploying veto (sic) to block proposed changes to the EU treaty".

This looks to be a cut and paste job from the Press Association, though, which says a great deal for an event that The Guardian calls "Prime minister's wuestions" (sic). What the politicians don't make up, the media does for them.