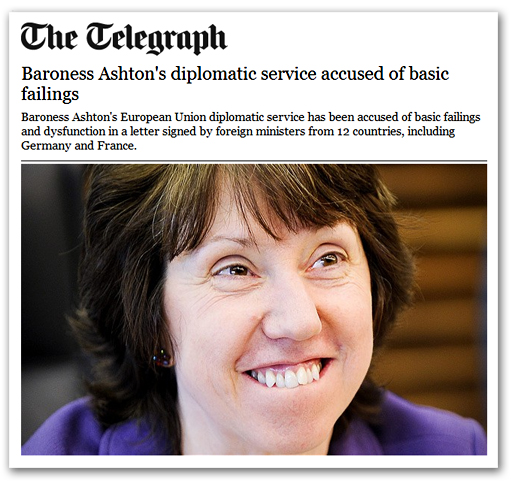 Christmas is a time of good will to all men but, clearly, not all women – and especially the ghastly Cathy Ashton. In fact though, her very existence is a benefit to the cause, a testament to the very nature of the nature of the "evil empire" that rules over us.

But, it seems – according to Bruno Waterfield - even the "evil empire" is sick to the back teeth of the woman – just supposing empires, evil or otherwise, have back teeth.

This is not news to us. For some time, there have been murmurings of discontent, but latterly divers foreign ministers have added their voices to the growing chorus of discontent. Strange though some people might think it, we don't actually give a rat's bottom. The "colleagues" can have her with our blessing – in a delicious inversion, their loss is our gain.

The only real problem is that the woman is paid such an obscene amount of money - £230,000 plus expenses, pensions and all the rest. But here there is one small advantage in being in the EU – we only have to pay about 12 percent of her total cost, the rest being shared between the other member states.

Of course, if we left the EU altogether, we would have to pay nothing at all to the woman's upkeep and the "colleagues" would have to bear the full burden of her costs, as well as having to put up with the woman. That, as Raedwald observed is a reason to be cheerful. More to the point, it is yet another reason why we must leave the EU.