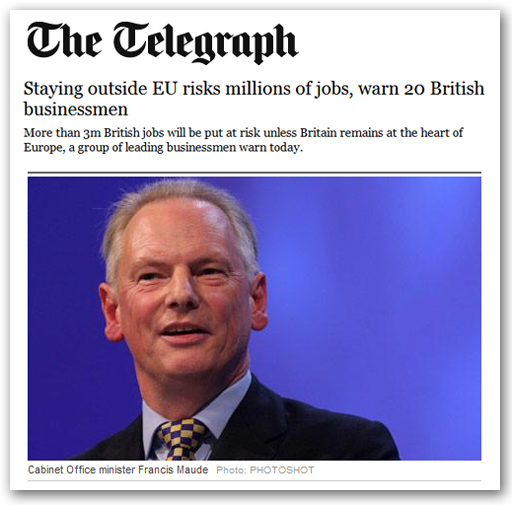 Right on cue, as the forces of evil move in to protect their interests, Roland Rudd leads the ranks of euroslime in a letter to the Failygraph. Second on the list of these "20 British businessmen", incidentally, is Richard Branson, a man who founded his business empire on the basis of VAT fraud, and has been living on the edge ever since. But if there was ever a reason for shunning his goods and services, this is it.

Anyhow, this dire crew are reverting to the "same old, same old", but that does not mean the message does not have traction. It is a taste of things to come, should we get into a referendum campaign for real, with the Failygraph playing its usual ambiguous role, running with the hares and the hounds.

At the heart of the message, however – as might be expected – is a lie. For sure, if trade ceased completely with the EU-26, we might lose up to three million jobs, but since we have a balance of trade deficit, we could repatriate up to four million, leaving us with a net gain of a million – or perhaps more.

Then, having left the EU, the "guest workers" go home. Ours come back, of course, but I don't think anyone is under any illusion that, in employment terms, we would be a net beneficiary. Once we have left the EU, therefore, restrictions on EU trade and immigration could eliminate our unemployment.

The central lie, though, is not what it seems. What this self-interest group seeks to portray is that trade with the EU through the Single Market is necessarily dependent on membership of the EU. That is not the case, and therein resides the lie. According to the treaty, EFTA members of the EEA, including Norway, fully participate in the Single Market without being EU members.

We are the first to acknowledge that leaving the EU, without making alternative arrangements for trade – such as membership of the EEA – could be enormously disruptive. But no sane person is going to argue that we should leave the EU without first negotiating transitional agreements.

And nor is the much-touted "fax machine diplomacy" issue a serious problem. Much of the Single Market harmonising legislation has global application, applying to Chinese exporters and well as British enterprises. And – as we have pointed out - this is negotiated through a wide variety of international bodies, at which the UK would still retain seats. In many respects, the EU is only the "middle man", processing laws based on principles agreed at a higher level by global players.

Nevertheless, this is the sort of propaganda we can expect – and it will have an effect. Cameron and his administration, and all three major political parties, will support it. So will the BBC and Channel 4 (with considerable enthusiasm). Most of the major newspapers will go for it as well. Remember, neither the Failygraph nor the Daily Mail support our leaving the EU. (Note, it is the Failygraph which is publishing this letter with a high-profile news piece to boost it ... not the Grauniad or Indy.)

To counter it, we need to get our act together, rehearse our arguments and get them right. Polemics and showy statements won't cut it. We are in a fight to the death here, with no quarter given.