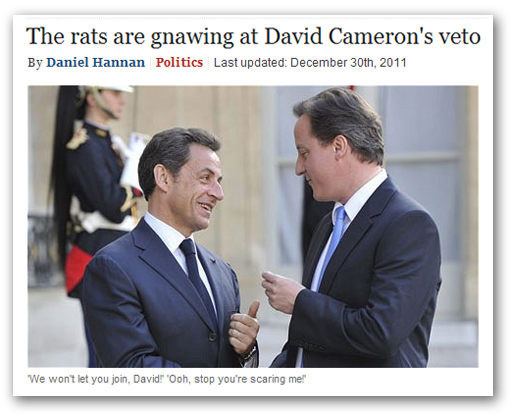 No one ever said Hannan was thick … quite the reverse. He's a bright cookie really, although so full of himself that his lack of homework lets him down. But he remains bright enough to understand the point we have been making about Cameron's fantasy veto, and if the man is setting himself up to to project that there was a veto – which is precisely what he is doing - then he is playing games. That's what politics (and ego) does to the intellect.

In a piece originally entitled "What exactly did ~David Cameron veto, again?", thus thus attempts - as the title suggested - to explain what it was The Boy actually did in Brussels. And while such manifestations can usually be ignored, what cannot pass without comment are the intellectual contortions young Daniel is having to undergo in order to make his point.

Telling us that the "veto took place behind closed doors, and it was several days before the draft accord emerged", people, he says (including himself - making up the whole country, you will be pleased to know), were cheering the fact of a veto rather than the blocking of a specific proposal. It was enough to know that, for the first time since Margaret Thatcher secured the budget rebate in 1984, a British prime minister had said "no".

Saying "no" and a veto, of course, are not the same thing, but Hannan - presumably - seeks to argue that they are. But in his muddled piece, he acknowledges that the "colleagues" are to adopt a separate intergovernmental treaty among themselves. He also tells us that it is regarded as "transitional" and that there is a general expectation that, eventually, its provisions will be folded into the main treaty structure.

This is actually no great secret, as this is what the Merkozy were aiming for in the first place, Furthermore, the statement by the euro area heads says exactly that. Thus, we have another of those occasions when the dastardly "colleagues" are saying exactly what they mean – the swines.

In yet another non-revelation, Hannan then informs us that the eurozone countries plan to make full use of EU institutions, which is again no great secret, although The Boy briefly hinted through his underlings that the UK might seek to prevent this. As always though, this came to nothing.

But it is this that is troubling Hannan. In his terms, The Boy blocked changes to the EU treaties, which meant in theory that the "colleagues" would have to operate outside the framework of European Union, and without support from or use of the institutions.

Needless to say, the "colleagues" are ignoring such fine distinction, driving the poor little Hannan into something of a tizzy. "The use of EU structures was not part of David Cameron's veto; it was David Cameron's veto", he complains. "If we were to give in, we would have attracted all the opprobrium for nothing. Nothing".

Alarmingly, to the Hannan, if this is true, the applause from the country – which has apparently been cheering Cameron to the rooftops, "would turn out to be bogus". Sadly, that is the fate of The Boy's fantasy veto.

What, then, must be done? And here Hannan really should know better. "We should take Nicolas Sarkozy and the other federalist governments at their word", he says. "They say that Britain has opted out of European integration, electing to stay only in a free trade area. So be it".

What he says is that the core group should not go on to form their own Fiscal Union (FU!) – but oh dear! What is left outside the core is not and never has been a free trade area. It always has been a customs union, and Hannan should know that.

But, basing his nostrum on his own fantasy, we are led to believe that the way out is for the FU to become the primary vehicle for political integration. He thus asks: "Shouldn't powers pass from the EU to the FU, until the 27-state treaty is left as the simple free trade area of which Sarko speaks?"

At that point, Hannan asserts, it (the rump of the EU) might as well merge with the four EFTA members, and call itself EFTA. The core, eurozone countries would remain within that free-trade area, but would also have their FU (which by now might be Federal Union) alongside it.

Even at this point, the man is gibbering. The trading bloc is the EEA, of which EFTA is part. And all EU members are part of the EEA. The EFTA issue is a complete red herring because, if the FU did as Hannan suggested, the EEA would remain.

No fantasy begets fantasy, and which Cameron is supposed to adopt, a ploy that would raise him to the rank of statesman – and would, incidentally, guarantee him a landslide at the next election, says Hannan.

One is getting to the point here where reality is getting so distant in some quarters that it seems impossible for it to be clawed back. Commentators like Hannan are regressing, retreating into a fantasy world that is increasingly unrecognisable. The only compensation seems to be that his comments are not entirely supportive. By some, Myrtle is being recognised for what he is.

And not least of those is Your Freedom and Ours, who has tended to be more charitable than us, although no longer. Interestingly though Helen points The Sun, which has The Boy doing a "EU-turn" over the treaty, preparing to sign a "new version" of the treaty.

We will not attempt to unravel this muddle (yet). But the MSM have got themselves into a right old mess, and don't seem to know whether they are coming or going.