Playing it as a farce 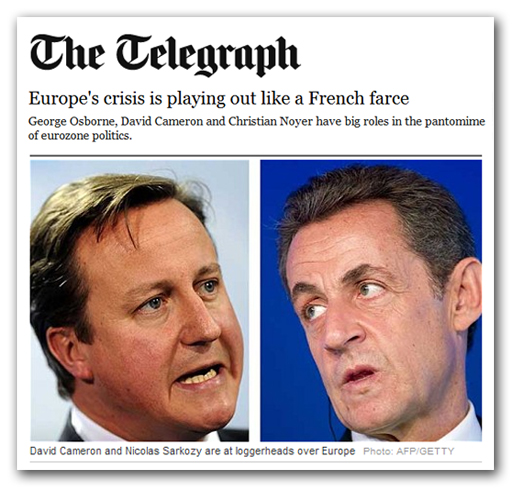 I was thinking of writing a short piece, explaining why I had not done a post on the latest comings and goings between Cameron, Clegg and Sarkozy, when up popped this in the Failygraph.

This has Matthew Norman (who he?) explaining that, "Europe's crisis is playing out like a French farce". Actually, that is not the case. What is happening is that the British media is presenting developments as a farce, demonstrating yet again how a fundamentally unserious industry reduces everything it can to the level of a personality-driven soap opera.

For want of intelligent, knowledgeable journalists, that is all it can cope with, preferring to stay within its comfort zone rather then explore complex issues and explain them properly.

This undoubtedly explains, in part, why – as Autonomous Mind illustrates – newspapers are part of a failing industry, haemorrhaging readership, which is not prepared to pay for its ill-informed pap.

Like us, people are prepared to look at their websites – increasingly more in hope than expectation of finding anything useful – but they will not invest good money in a low-grade product, driven by the obsessive show-biz cult which seems to motivate contemporary editors.

AM makes his particular point about the Guardian, which is said to be losing £40 million a year, despite having one of the top websites in the newspaper business. (I have borrowed his graphic - see below.) 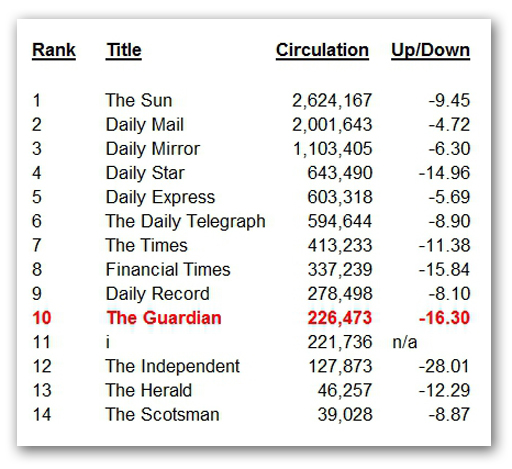 This rather goes to show that anyone can pull in the hits, as long as you are able to throw money at providing content. Building a readership from nothing on a shoestring – well, that's a different game, one us bloggers have to play. But anyone can lose money.

Financially, the Failgraph is doing better, but it charges ridiculous sums for its online advertising – and is now prostituting itself with advertorials, which are quite definitely slanting its broader coverage. We wonder how long that bubble will last – and before advertisers realise that coverage is grossly overpriced.

Interestingly, the newspaper I was talking up a little while back, has actually done spectacularly badly, losing 15.84 percent of its circulation, year on year – comparable with the Guardian which lost 16.3 percent, as against the Failygraph which shed 8.9 percent of its readership. With a circulation of just under 600,000 (594,644), though, that paper is a far cry from the heady days when it routinely sold a million copies every day.

The response of the papers has been to increase their cover prices, with both the Guardian and the Failygraph charging £1.20. Buying a "quality" daily and Sunday now requires an investment of the best part of £600 a year.

Unsurprisingly, when you have an industry racing to the bottom, turning everything into soap opera pap, many people have concluded they have better things to do with their money. Yet, for all their hubris, this is something the media seem incapable of understanding.