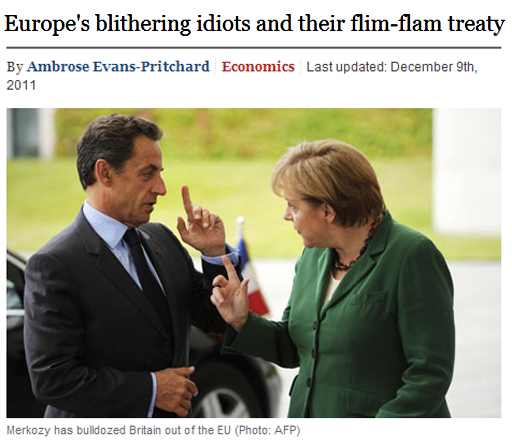 Standing back from the detail, as has Ambrose, one needs to ask oneself not whether Cameron has handled this European Council well, but whether the "colleagues" made the best of it.

Ambrose takes the view that they have displayed "remarkable petulance and stupidity", with the leaders of France and Germany having "more or less bulldozed Britain out of the European Union" for the sake of a "flim-flam treaty" that offers absolutely no solution to the crisis at hand, nor indeed any future crisis.

Looking at events from that perspective, it is hard to disagree with Ambrose. As we intimated in an earlier piece, the Council could have been handled very differently.

As we have actually seen with the lead-in to other treaties, there was no need even for the European Council to discuss the detail of treaty issues. It is not their role to do so, and the members, as constituted, have no power or authority to negotiate EU treaties.

In what is one of the arcane but important details relating to EU affairs – which the media insist on ignoring – there are two bodies involved in a treaty negotiation.

Confusingly, each body can comprise exactly the same people – the heads of state of government of the European Union member states – but in their various capacities, they have very different powers, responsibilities, with their status changing according to the role, when it comes to amending treaties.

In the first instance, we have the European Council, but its role, under Article 47 of the Lisbon Treaty, is to define the terms of reference for a "conference of representatives of the government", i.e., an intergovernmental conference (IGC). It is that body which then amends the treaty. The president of the Council – Van Rompuy – convenes the IGC, which in the first instance comprises exactly the same people who make up the European Council.

However, while the European Council is an institution of the European Union, charged with furthering the aims and objectives of the Union, the IGC – in theory at least – comprises independent representatives of the member states acting in their national interest.

Now, as far as we are able to ascertain, there was no attempt to decide on the terms of reference for the IGC, and nor is Van Rompuy recorded as seeking to convene an IGC. There is simply no mention of either in the Council Conclusions.

Crucially, the point here is that both decisions, if contested, are settled by majority vote. There is no veto, so Cameron could not have stopped the Council settling the terms of reference, nor the president convening the IGC. Thus, that there is to be no attempt (in the short-term) to amend the EU treaties, via the IGC, was the result of a decision made by the "colleagues", not the result of any action taken by Cameron.

In short, therefore, there is to be no attempt to amend the EU treaty because the "colleagues" did not want to pursue this route. It was their decision, and theirs alone, a decision which was not amenable to a veto. A veto could only have applied once the IGC came formally to approve a final text of a treaty amendment, whence any member state can exercise one.

But without a formal text under consideration, within the framework of an IGC, it has to be emphasised that there can be no veto.

The question thus remains as to what Cameron did veto, if he did indeed veto anything. There are several possibilities, but my current favourite is that he was presented with a draft statement similar in content to that eventually published by the eurozone heads, only cast in the name of the entire European Council.

One must remember here that, in European affairs, Cameron is a novice, and is also demonstrably ignorant on EU procedures and related matters. In the European Council, without access to his advisors, it is possible that he mistook this draft declaration for a treaty proposal which he was being asked to approve and, on refusing to endorse it, mistakenly confused his own action for a veto.

In other words, while Cameron was not presented with the text of a treaty – because one did not exist – was not working within an IGC because one had not been convened, and could not veto anything, in his ignorance he mistook his own actions for something they were not.

From this, it emerges that, had they so desired, the "colleagues" could have gone ahead with an IGC, challenging Cameron to veto at some later date the end result. Presumably, they chose not to take the risk.

Alternatively, it is not outside the bounds of possibility that they exploited Cameron's action to legitimise that which they wanted to do anyway – to side-step the EU treaty amendment process. In this latter case, it has to be said that the "colleagues" retained the initiative, and an unwitting Cameron, far from calling the shots, has been used.

This brings us back to Ambrose, who sees in recent events the possibility that the "colleagues" are using Cameron as a scapegoat.

Possibly, that makes sense. Faced with an existential crisis and treaty options which, even if fully implemented cannot work, they are facing the break-up of the Union, come what may. It is better, therefore, for the "colleagues" to sacrifice one member in the hope that, when the collapse comes, the rest will rally to the flag, blaming their woes on a recalcitrant Britain.

In the current events, therefore, Ambrose sees a "moment of liberation", which he enjoins us to enjoy. Certainly, his analysis allows us to speculate that Britain is engaged in a process which may eventually lead to its withdrawal from the EU - whether intended or not. And, if this is the outcome of the events of the last few days, then we can count our blessings without worrying too much about the whys and wherefores.

But the worry is that Cameron, inherently, is an enthusiastic europhile – with no substance to his actions other than an attempt to reclaim lost ground amongst his own party's europlastics. Once he has secured his flanks, one can then see him making serious concessions to the "colleagues" in order to recover his position in "Europe", leaving us worse off than we are now and were a few days ago.

As it stands, Cameron is not in control, but then neither is there any evidence that the "colleagues" are any better placed. In that uncertain situation, we feel that any rejoicing is premature and may even be misplaced. Events are too hard to read, and the outcome of recent events too obscure for anything other than continued vigilance.

Trust and optimism are not sensible options.