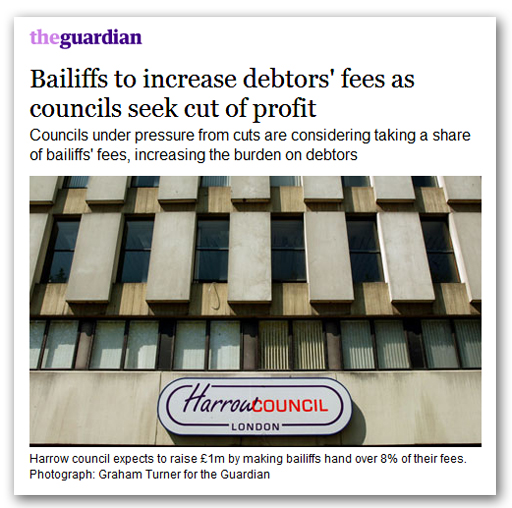 It is always fun to see the MSM catching up. We did the story in September so to have the Grauniad only three months behind isn't bad going. The paper does, however, illustrate the huge sums involved in the bailiff scam, with our friend Fern Silverio, the divisional director of collections and housing benefits at Harrow council, telling a conference of bailiffs this year:

Councils will be under pressure to find more income streams, and on a big contract covering all debt the bailiff can still make an enormous profit. [Harrow] council will pass debts worth around £10m to our bailiff partners. From that, they should expect to collect between £3m and £4m, which should generate fees of more than £1m.

The paper also gets the point that this money is going to be extorted from the poorest, least able members of the community, a typical response of a parasitical system that knows no moral bounds.

We thus get a quote from John Kruse, a leading expert on bailiff law in the UK, who also works for Citizens Advice in east London. Referring to "some of the more image-aware members of the [bailiff] sector", he says they are warning that that if bailiffs are asked to pay money to councils then that has to come from somewhere. The way it is going to be produced will be by bailiffs upping the fees that they are charging or being more aggressive about the way they chase people.

Kruse adds, "The amounts that they collect at the moment are fees that they are allowed to collect by statute. That's their profit, so if the council is saying, 'We want to cut that profit now,' then it's either a case of the bailiffs making less money, which is unlikely, or they collect more money one way or another".

Despite the extremely dubious legality of this scheme, and the outright illegality of most bailiff operations, we still see no broader interest from the MSM, which is hardly surprising. But they, no doubt, will be so surprised when we start seeing dead bodies. That certainly is the direction of travel.

Either the government or the police are going to have to intervene, to rope in these cowboys, or there really is going to be murder done. But if either or both want to abandon the rule of law, then they really cannot complain if people take their law into their own hands.

The deal is they enforce the law so that we don't. But if they don't, we have to. They can't have it both ways.