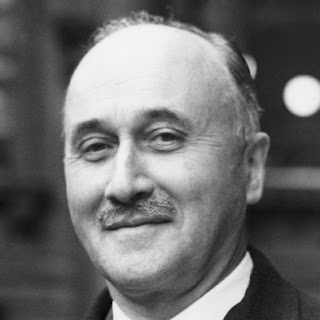 Subtle, insidious propaganda … just what the BBC does best: a radio play on Monnet, and the Schuman plan, aired this afternoon and accessible on-line.

What is completely missing from the account is any sense that there was nothing new to the essence of the plan – the coal and steel community. It had been tried before the war by a man called Louis Loucheur. Nor do you get any idea that the structures of the community had been finalised by Monnet and his friend Salter in the 1920s.

Thus, effectively, the play follows the EU hagiography, although it inserts a sequence in which Monnet discusses the effect of nuclear weapons on the maintenance of peace in Europe.

This does not conform with the way Monnet saw them at the time (according to his own biography) and seems to be an invention, inserted to overcome the objections that Monnet's peace plan (the rationale of the Schuman plan) had already been overtaken by events.

Thereby is concealed the central lie behind the establishment of the European Union. No one will deny that Monnet was anything other than a smooth and extremely skilled political operator. But his vision of a supranational authority, governing Europe, as a means of preventing war, was flawed.

Once it is realised that his thinking stemmed not from the post-Second World War political reality, but the aftermath of the First World War, it is easy to see why he got it so wrong. The emergence of the two superpowers of the United States and the Soviet Union, armed with nuclear weapons, changed everything, and made Monnet's pre-war model for keeping the peace entirely redundant.

What, in fact, the plan (which became the European Union) was all about, was allowing Germany to re-industrialise and thence to be restored to the community of nations, without raising fears in France that a resurgent Germany would again challenge (i.e., invade) France.

For this expediency, we have had to suffer the charade that the EU is an institution devoted to the maintenance of peace. In fact, it is primarily a means whereby France can neuter the emerging political power of Germany, while allowing Germany to develop industrially and economically, without her neighbours feeling threatened.

And at the time – which we do get from the play – the Americans were in favour of the arrangement. With the start of the Korean War, they wanted German industrial power back online, and wrapping the country up in a surpranational construct was one way of squaring this with the French.

When the Americans then wanted Germany to re-arm, in order to take over some of the burden of blocking a potential Soviet invasion, that too required an overarching supranational authority to reassure the French and other continental nations that they were not to be exposed once again to a militant Germany.

It is here that many of the pundits have got it so wrong. The EU was never a means of enabling Germany to conquer Europe, achieving peacefully what it had failed to do by force. It was exactly the opposite … the silken threads of restraint, permitting Germany to become an economic and industrial power, without becoming a political threat to the rest of Europe.

And for this, we have to suffer the construct that is pulling down Europe so dangerously. The Monnet paradigm, obsolete and inappropriate before it was ever introduced, has been kept in place on a foundation of lies, and a false history which the BBC seems only too happy to reproduce.

Listening to it, it sounds all so plausible though. But then Monnet was also an accomplished liar, his businesses built on criminal deception and fraud that he carried over into government. The European Union, his creation, is a testament not only to his political skills, but also his criminality – in keeping with most French politicians, it seems.