The yellow in peril 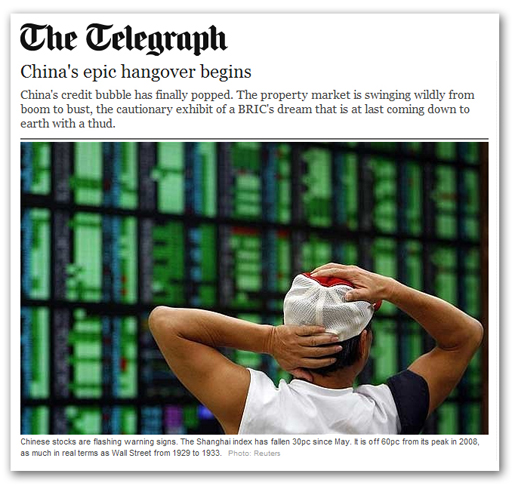 Through the series of crises afflicting the euro, the prospect of a rescue by China emerges every now and again. Personally, I have had my doubts, having long come to the view that the Chinese economy is a basket case, on the verge of collapse.

Now, two pieces in the MSM confirm that view, directly and indirectly. Firstly, Ambrose runs a piece telling us that China's credit bubble has finally burst, with property prices crashing.

Then there is a piece by Joseph Sternberg in the Wall Street Journal, which tells us why China will not do a deal on carbon [dioxide] emissions. To do so would require restructuring its economy, writes Sternberg – but that applies to Western economies as well.

Reading between the lines, for whatever political and economic advantages may be gained from appearing to go along with the climate change obsession – and any activity would never be anything more than cosmetic – the Chinese economy is in such a parlous state that the authorities cannot even go through the motions of compliance.

However, these are not the only signals of impending trouble. The AFP agency reports that China's manufacturing activity contracted in December while foreign direct investment fell for the first time in 28 months.

Chinese exports are expected to grow 10 percent next year, compared with a forecast 20 percent, and drag economic growth below nine percent for the first time in more than a decade, the agency also reports. And while such growth rates would trigger wild rejoicing if Western economies could deliver them, for an economy wedded to high levels of growth, this is something of a crisis for China.

But in fact, as Ambrose observes, it is hard to obtain good data in China, and even this lower estimate may prove optimistic, especially if the euro-crisis drives European economies into recession.

Strangely though, China is still sucking in jobs and capital, and there is a major scandal building over the behaviour of General Electric in Waukesha, Wisconsin, where it is planning to move its 115-year-old X-ray division to Peking. In addition to moving the headquarters, the company will invest $2 billion in China and train more than 65 engineers and create six research centres.

But, where this is attracting the strongest criticism is that Obama has appointed GE Chairman Jeff Immelt to head his commission on job creation (job czar). Immelt was supposed to help create jobs, but it seems no one told him that these jobs were supposed to be created in America.

The outcry, however, points up the stiffening resistance to exporting jobs to China, when unemployment throughout the Western world is emerging as one of the top political issues. And when we see China slapping tariffs on US manufactured products, we cannot rule out various degrees of trade war beginning to affect the Chinese and then the global economy.

Despite this, few economic commentators seem to be factoring in the effects of a Chinese downturn, most seemingly assuming the economy there will continue to expand. This also means that there is another major unknown, ready to afflict the developed world. Our reliance on cheap manufactured goods is huge, and disruption could have untold effects.

China in trouble, therefore, is bad news – the yellow in peril, so to speak. But the even bigger problem may be that no one seems to realise that another disaster could be gathering over the horizon. Added to the problems we already have, that could be the last straw.