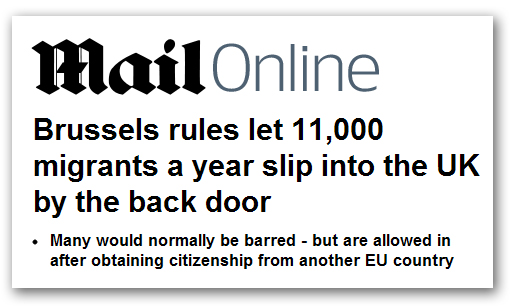 We congratulated the Grauniad the other day for only being three months behind. So what do we make of the Daily Wail being more than five year behind the curve as it highlights a "loophole" in EU law which is allowing thousands of immigrants into the UK via a back door?

We first identified this problem on 4 May 2006, the source being Directive 2004/38/EC. We gave it more detailed treatment in 2007 and again in 2008, keeping up our commentary to this current year.

It is, of course, a weakness of this blog that we speak to such a small audience, but that is nothing by comparison with the MSM which seems to be totally detached from reality, taking years to find out what is happening on its own doorstep.

The delay is also a reflection of the limited range of sources used by the MSM - here we see the newspaper relying on an MP as a classic "comfort zone" source. Despite certain blogs being ahead of the game for years, the ostrich-like behaviour of the MSM does not allow them to acknowledge their presence. They would rather live in ignorance.

This extends to the current story, where the newspaper fails to identify the offending directive or properly to explain the situation. But it does inform us that, "officials admit there is little they can do to curb immigration from the EU, because free movement of labour is a fundamental principle of the single market".

That is similar to the very point we made in 2006 ... although this has nothing to do with the single market. It is one of the "freedoms" enshrined in the Treaty of Rome and carried over into the Lisbon treaty, a "fundamental objective", as we wrote, of the European Union.

And that is another reason why we must leave the European Union.