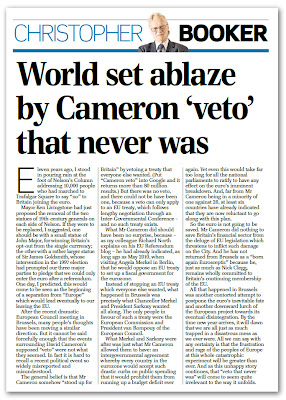 It cannot be said forcefully enough, writes Booker in this week's column, that the events surrounding David Cameron's supposed "veto" were not what they seemed. In fact, it is hard to recall any recent political event having been so widely misreported and misunderstood.

The general belief, he tells us, is that Mr Cameron somehow "stood up for Britain" by vetoing a treaty that everyone else wanted. But there was no veto, and there could never have been one, because a veto can only apply to the final text of an EU treaty, following lengthy negotiations. No such treaty existed.

Thus do we get the synthesis of the posts on EU Referendum, with Booker taking us to the start in May 2010, when Cameron, visiting Angela Merkel in Berlin, said that he would oppose an EU treaty to set up a fiscal government for the eurozone.

But instead of stopping an EU treaty last Thursday/Friday, what happened in Brussels was precisely what Merkel and Sarkozy wanted all along. The only people in favour of such an EU version were the European Commission and Van Rompuy of the European Council. But the Merkozy were after just what Cameron allowed them to have: an intergovernmental agreement.

So, Booker concludes, the euro is not going to be saved. Cameron did nothing to protect Britain's financial sector from the deluge of EU legislation which threatens to inflict such damage on the City. And he has not returned from Brussels as a "born-again Eurosceptic". Just as much as Nick Clegg, remains wholly committed to Britain's continuing membership of the EU.

All that happened in Brussels was another contorted attempt to postpone the euro's inevitable fate and another downward lurch of the European project towards its eventual disintegration. By the time the New Year arrives, it will dawn that we are all just as much trapped in a disastrous mess as we ever were.

All we can say with any certainty is that the frustration and rage of the peoples of Europe at this whole catastrophic experiment will be greater than ever. And as this unhappy story continues, that "veto that never was" will come to seem quite irrelevant to the way it unfolds.

What is not irrelevant though, is the way the media has treated the story. Had journalists understood what a "veto" actually is, and how it applies within the context of a treaty negotiation, Cameron's initial claim that he had "effectively wielded the veto" would have been treated for what it what – polemics.

Even Wikipedia could have helped them out here, defining the veto for us. Helpfully, it tells us that the word is Latin for "I forbid". It is the power of an officer of the state to unilaterally stop an official action, especially enactment of a piece of legislation.

But what applies to legislation also applies to treaties. Thus, the veto in this context was the unilateral power to stop a treaty going ahead. And Booker, in defining the circumstances in which the veto applies, calls out the lie perpetrated by the media.

Oddly enough, a draft intergovernmental treaty now exists which, as we noted yesterday, is as close to an EU treaty as it is possible to be, without actually being one – covering exactly the scope that Merkel and Sarkozy wanted.

Therefore, for all the torrent of media coverage of Cameron and his heroic "standing up for Britain", he has achieved nothing at all by way of delaying the treaty process. That much alone made his pretend veto irrelevant, but at least we are reminded of the inadequacy of the media when it comes to reporting EU matters.