Authors of our own grief 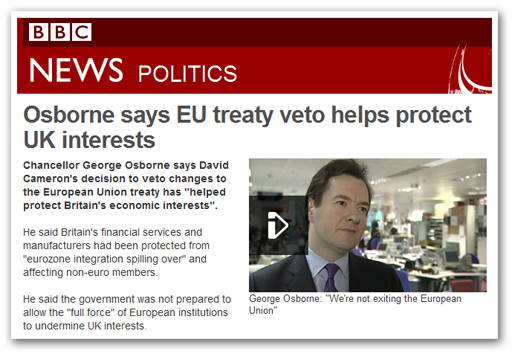 Never in the field of human conflict have so many been misinformed by so few. One of the most notable additions to the litany of misinformation being The Times. As the paper of record (no link), it declared: "Early yesterday morning, Mr Cameron became the first British prime minister to veto a new EU treaty …".

It is topped only by a fatuous leader in The Sunday Times this morning, which witlessly pontificates, "The Prime Minister was left with no option but to exercise the British veto in Brussels", and the moronic The Sunday Telegraph leader, which declares: "Early on Friday morning, the Prime Minister used Britain's EU veto to block a full-scale treaty that would have created a closer fiscal union between the 17 members of the eurozone".

For the small but growing band who know that there was no treaty draft to veto, and no IGC in which framework a formal "British veto" is cast, these last few days mark something of a watershed. It has been a period in which the combined mass of the MSM has demonstrated that it has not the least interest in purveying the truth, and has no interest in distinguishing between falsehood and the truth.

Even in this tarnished world, though, it does matter that the man who calls himself prime minister of the United Kingdom has created an artful web of lies, for political advantage. The last time that happened with any degree of profile was when Blair made his false claims about Iraqi weapons of mass destruction.

Blair's defence then was that he believed the falsehoods he was spouting, so technically he was not lying. The same cannot be said of Cameron.

Unless he is willing to admit to a level of ignorance that would render him entirely unsuitable for any high office, he cannot believe that on Friday last he was presented with an "EU Treaty" in Brussels or, within the context of the European Council he attended, that he actually vetoed this non-existent treaty.

But as with the weapons of mass destruction, the media is again found wanting. Instead of calling out the quite obvious falsehood, it has perpetuated the myth, no more so than the BBC which even yesterday was retailing second-hand falsehoods as the preposterous Osborne joined the fray to defend his boss.

"Chancellor George Osborne says David Cameron's decision to veto changes to the European Union treaty has 'helped protect Britain's economic interests'", it told us – without so much as a blush.

The thing about the BBC, of course, is that it enjoys "prestige". This matters far more in the media world than veracity. Thus, we saw the Osborne's version of Cameron's falsehoods filtering through the system, to be repeated by most of the British print media, then into the news agencies and eventually, by that route, into The Washington Post.

By dint of repetition and multiplicity of prestigious sources, falsehoods acquire the mantle of truth, conveying far more authority and reach than the truth itself, which struggles for a hearing.

It is not as if the truth, even from first principles, is in this case so difficult to work out, and neither can it be said that it is not accessible to those who wish to be informed. Latterly, we have seen Witterings from Witney pitch into the fray once more. Jim Greenhalf adds his voice and now Booker puts his weight behind the truth - contradicting his own newspaper.

But Booker's column, this week, provides a good, if unintended, example of the lack of interest in the truth, as his Cameron story is grouped with a discussion of David Attenborough's latest propaganda on climate change – and it is this which gets the comments.

Elsewhere, attached to the torrent of on-line media stories, purveying uncritically Cameron's lies, we see a blitz of comments, running collectively to hundreds of thousands. And while there is a very significant minority which does not buy into the falsehoods, it is a tiny minority. By far the majority is willing, if not eager, to swallow the lies, taking what the media tells them as the truth, using it as the baseline for discussion. 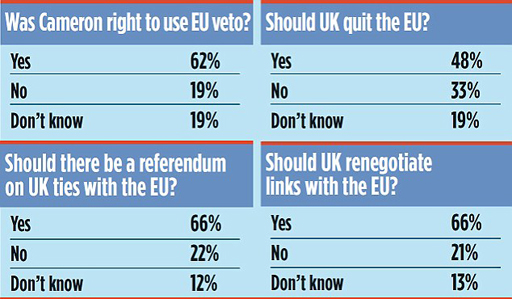 What then is the value of public opinion when, as we see today in this Mail on Sunday poll, the collective pronounce on an event which did not happen, giving Cameron a 62 percent approval rating for "using" his non-existent veto on a non-existent treaty?

One is accustomed to the inherent statistical errors in polls, but this is in a different league. Public sentiment has been whipped up to respond to a lie.

Then, in the same poll, we see 48 percent support for leaving the EU. Noting how easily public opinion has been manipulated on the previous question, how solid is that finding? Given different circumstances – such as a real referendum, with the cold winds of economic reality blowing – does the poll represent anything other than the madness of the moment?

This says a great deal for the prospects for this nation (and any other) enjoying a functioning democracy. We should expect politicians – even prime ministers – to lie. And we should expect slovenly and superficial reporting from the media. To assert that they lie and mislead is entirely unexceptional.

But what chance have we of exerting ourselves as the people, when despite that so many of us are prepared, uncritically, to believe what we are told by both sources?  How can the people be relied upon to approve or even dictate policy when they are so easily gulled by lies?  How reliable is public opinion when it can so easily be manipulated?

"The key to wisdom is this - constant and frequent questioning ... for by doubting we are led to question and by questioning we arrive at the truth", says Peter Abelard, in one of many quotations extolling the virtues of scepticism. Although I am accused of the sin of cynicism, it is scepticism that I believe should be the default mode, especially – and always – when dealing with politicians, their officials, and the media.

Until we can learn that simple lesson and apply it, we are nowhere. We end up the gullible tools of the politico-media complex, ready to do their bidding at a drop of a hat, on the strength of a diet of lies and distortion that we are prepared so readily to believe.

But whether we have the capacity as a nation to transcend our collective gullibility and develop into a mature, functioning democracy, I have my serious doubts. And recent experience has not given me any cause for optimism. These are dark days, and especially so when, as a collective, we are authors of our own grief.