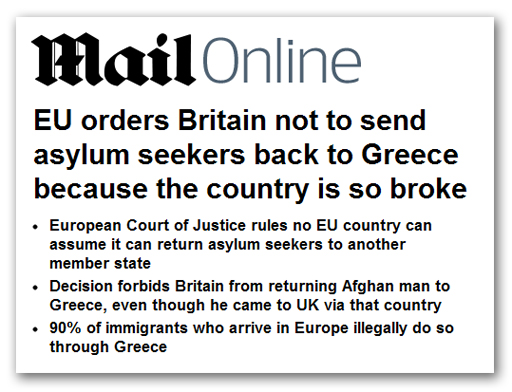 You always have to take the Daily Wail with a pinch of salt but, on cross-checking this story with the official press release, the paper seems to have got it essentially right. The judgement states that an asylum seeker may not be transferred to a member state where he risks being subjected to inhuman treatment, and further, EU law does not permit a conclusive presumption that member states observe the fundamental rights conferred on asylum seekers.

Under normal circumstances, asylum seekers are supposed to claim asylum in the first country in which they land in the EU. When they then move on and seek to claim asylum in a second country, that country (in this case Britain) is entitled under the so-called "Dublin II" Regulation, to return them to their country of entry.

But, the ECJ now says, if the initial recipient country breaks EU law by not providing adequate facilities for asylum seekers, to the extent that they may be subject to "inhuman treatment", that negates the rights of second countries to return them to their country of entry.

This is madness – absolute barking madness. But it is even worse. The rights British citizens are being trampled on wholesale here, by a political court which is attempting to stitch together a failed policy by imposing on those least likely to squeal.

In the Wail piece, we get the usual talking heads saying how terrible this all is – classic of the "he says, she says" school of journalism. But that isn't good enough. This is outrageous. The trouble is that decades of such outrages have blunted our sensibilities.

There is, however, only one answer to this sort of thing. We have to leave the EU … and the sooner the better. If they are so interested on asylum seekers' rights, they can park them on the lawn outside the EU parliament - either Brussels or Strasbourg ... I don't care which. I am sure the MEPs will happily contribute to their upkeep. I don't see why we should.

COMMENT: "WHY WE MUST LEAVE" THREAD
Posted by Richard at 12:52