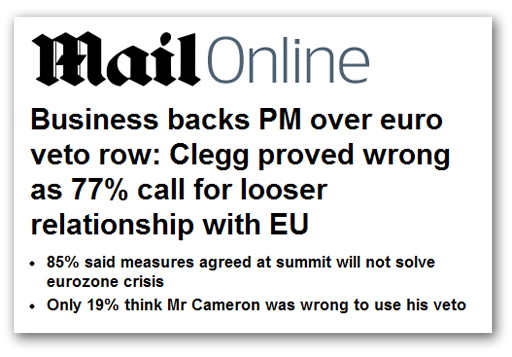 It was British business, largely, which supported entry to the then "Common Market". The ostensible reason was that it would open up continental markets, but an equally important (if undisclosed) reason was the belief that the exposure of industry to European competition would help break the power of the unions.

On both counts, "business" was wrong. Joining the EEC did nothing to boost exports, but merely opened the British market to the continentals – as well as severely damaging Commonwealth allies - and it was to take Thatcher to start taming the power of the unions, quite independently of what was by then the EC and soon to become the EU.

These errors, however, typify the relationship of British business to the EU – invariably lost in some misty-eyed make-believe, its "leaders" have been staunch advocates of the Single Market, and thereby firm supporters of continued membership, even if enough of them were to take fright at the prospect of joining the single currency.

At least, in its inability to understand European politics, however, "business" is consistent in getting things wrong, hence a new survey of business sentiment reported by the Daily Mail today. Joining the ranks of political fantasists, the leaders have overwhelmingly backed David Cameron's decision to veto a new EU treaty.

A poll of members of the Institute of Directors found that 77 percent "support the defiant stand he took at a Brussels summit earlier this month" and 63 percent wanted "a looser relationship with Brussels". Of the 1,000 questioned, 42 percent wanted to see the repatriation of some powers from the EU and 21 percent wanted complete withdrawal.

Indicating an apparent change of heart, Graeme Leach, Director of Policy at the IoD, says: "The euro crisis has become a game changer. Our members are saying: 'Hang on a minute, are we really gaining from this system? '" He adds: "There really does seem to be broad brush support for a renegotiation of the relationship across the board".

In fact, though, nothing of substance has changed. This is simply a repetition, in a slightly different format of the same old, same old agenda, tirelessly pumped out by the europlastic Open Europe and the motley crew of Tory MPs.

Business, such as it is capable of sentient – much less sensible – thought, is still firmly in favour of continued memberships of the EU. The figure to focus on is that only 21 percent of those polled supported withdrawal, a considerably smaller proportion than in the population at large. In any fudged referendum (and there will be no other sort), business will opt for the inevitable "renegotiation" ploy, diluting and thereby neutering the withdrawal vote.

The one good thing to come out of this, though, is that it is spooking Chris Huhne, who seems to be taking Tory europlastics at their own estimation of their value, accusing them of plotting to make the UK a "semi-detached" member of the EU and giving the impression they wanted to "destroy" the 27-nation bloc.

Showing about as much understanding for the political situation as he does climate change, he fails to realise that Tory sentiment is primarily driven by electoral considerations and that that core beliefs of the Tories differ little from his own.

It may suit Cameron for the moment to allow his licensed dissidents free rein, but in any electoral situation, they will be quickly brought into line and, like all good tribalists, they will obey the Great Leader.

Thus, all Huhne seems to be achieving is to give unwarranted gravitas to a group of Tory opportunists, who revel in the descriptions he affords them, conveying an image which they are at pains to convey to their electorates.

In short, therefore, in this run-up to the holidays, we are seeing nothing more or less than the usual empty political posturing, reinforced by the usual fog of incomprehension from the business community. One wonders how much of this will survive the Christmas firewall, although the continued demise of the euro is bound to keep the EU in the headlines for some time yet.