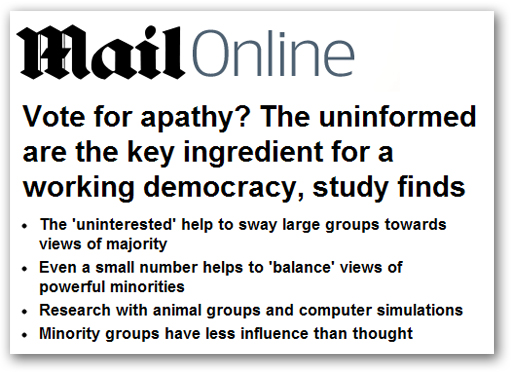 The Daily Mail is touting a study on democracy published by Princeton University last week, asserting that the uninformed can be vital to democracy. For the university, this is not a new theme, with dozens of papers around the subject, such as this one and one published in 2002.

On the basis of this current work, however, we are told that, contrary to the ideal of a completely engaged electorate, individuals who have the least interest in a specific outcome can actually be vital to achieving a democratic consensus. These individuals dilute the influence of powerful minority factions who would otherwise dominate everyone else, according to new research published in the journal Science.

The finding, readers will be pleased to learn, are based on group decision-making experiments on fish, as well as mathematical models and computer simulations. And it is upon these slender bases that we are given these insights into human political behaviour.

The thesis, in essence, is not difficult to follow. Lead author of the paper on the study, Iain Couzin, states that even a small population of indifferent individuals act as a counterbalance to a minority — whose passion even can cause informed individuals in the majority to waver — and restore majority rule.

"We show that when the uninformed participate, the group can come to a majority decision even in the face of a powerful minority," says Couzin. "They prevent deadlock and fragmentation because the strength of an opinion no longer matters — it comes down to numbers".

"You can imagine this being a good or bad thing!, he adds. "Either way, a certain number of uninformed individuals keep that minority from dictating or complicating the behaviour of the group".

If one struggles to accept this, perhaps the easiest way to understand it is to take the lumpen masses as a buffer which supports the status quo, and thereby prevents a minority group taking over and running proceedings.

However, in common with much of the work on this subject, the authors seem to be taking as their baseline a representative democracy, which means that supporting the status quo inevitably means supporting the prevailing consensus and blocking change. The power thus resides with the minority of (elected) representatives rather than a minority of activists seeking change

What is difficult to assess, though, is whether either state actually represents democracy. When the elected minority is actually a self-serving clique, maintaining the status quo can mean preserving an essentially undemocratic system, blocking a minority seeking greater power for the people.

And, as we observed earlier, power is as much part of the democratic equation as producing a balanced vote.

Thus, it seems we are actually not much further forward. The Princetown researchers preen themselves in finding that, "Our work is a simplification of reality, but it allows the underlying mechanics of this type of decision making to be observed and understood". But I am not so sure.

If we take democracy as the exercise of power by the people, the ill-informed can be merely an obstruction. It all depends on the motivation of the minority and the issues involved. After all, as the German people showed in 1936, the majority can not only be seriously wrong, they can deprive themselves of the very power which makes them a democracy.

And if the ill-informed deny their own power, how is that a democracy? Better, methinks, to have systems and structures which guarantee people power, than rely on the indifference of the ignorant and uncommitted as a buffer against change.