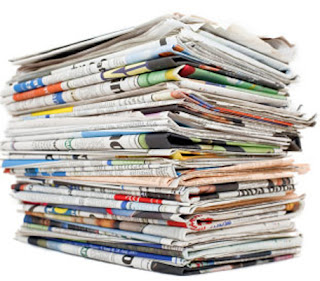 Already, with precious little currently to report, the newspapers (and, I presume, the broadcast media) are doing a Proverb 26:11, revisiting its stories of the past year, and with it their distorted world view.

That view is the cumulative effect of their output. Some of those stories are pure invention. A few are reported accurately but all reflect the inbuilt selection bias of a media which leaves far more information unused than is ever reported. Nevertheless, this is a media that finds space (and time) for acres of trivia and tat - and multiple pages for saturation coverage of single stories - thus completely distorting the news agenda and our perception of it.

For the newspapers, this is unlikely to be malicious. The people who run them are largely in the business to make money and, to do that, they are all chasing circulation and advertising. That shapes their coverage or, more to the point, the mistaken view of the print media on how to complete with 24-hour TV news coverage dictates their response.

Central to this is the belief that youth and female readership must be fostered, to which effect the middle-aged, middle class, white male has been abandoned. Long ago, the media declared war on us, deciding we were not wanted on passage. Not for them was the understanding that the reason I read a particular paper was because my father read it, and his father before that.

Thus, as even the Failygraph gave over the bulk of its page to the yoof and girlie agenda, abandoning news and intelligent analysis in favour of tat passed off as entertainment, we its core readership are abandoning it in droves, visiting only the website, some of us more to stare in disbelief than to be informed.

What is disappointing and terrifying in equal measure though is the evident propensity of so many readers still to believe uncritically what they are told. Most will claim to subscribe to the aphorism, "never believe what you read in the papers", only then to believe what they read or see on the television.

Some time ago, before the collapse of the Soviet Union, dissident Czech novelist Zdener Urbanek observed: "In dictatorships we are more fortunate than you in the West in one respect. We believe nothing of what we read in the newspapers and nothing of what we watch on television, because we know it's propaganda and lies. Unlike you in the West, we've learned to look behind the propaganda and to read between the lines, and unlike you, we know that the real truth is always subversive".

What he might have said, though, is that the whole truth is subversive. I am more and more convinced that the primary means by which the agenda is shaped is by leaving so much unsaid. News is only news – in the opinion of the MSM – when the MSM says it is. The rest, by inference, shall be ignored – and it is that which distorts our perception of the world.

Hence the pre-New Year resolution. We shall ignore the MSM retrospectives – they don't mean nuffink, other than to perpetuate the distortions the media have been hawking all year.  Their news is not our news. The MSM are aliens in our midst, trying to sell us a false bill of goods.