Now you see it, now you don't 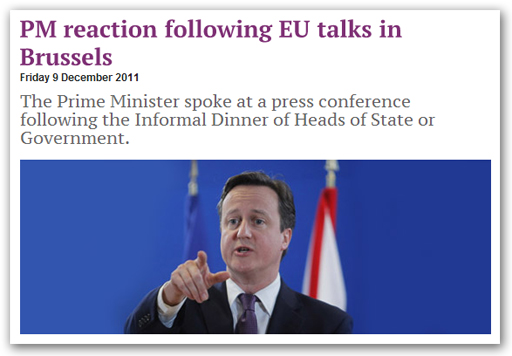 Deputy prime minister and foreign minister for the Irish Republic, Eamon Gilmore, indirectly offers conformation that there was no treaty that Cameron could have signed last week.

Asked whether the deal require a referendum, Gilmore said it was too early to tell at this stage, adding that it would not be clear if a referendum was actually needed until the text of the European agreement was finalised.

That, of course, is the reality. This was a heads of agreement discussion, with the detail to follow, when the fine print will be poured over and the parties will fight their corners during months of negotiations. Only then will a draft be available for signature and, only then, had it been an amendment to an EU treaty, could there be a veto.

Yet there is no mistaking Cameron's claim. On the Downing Street website, we see the text of his press statement on Friday, when he tells us that "I wasn't prepared to agree that treaty, to take it to my Parliament in that way, and that is why I rejected signing this treaty today". 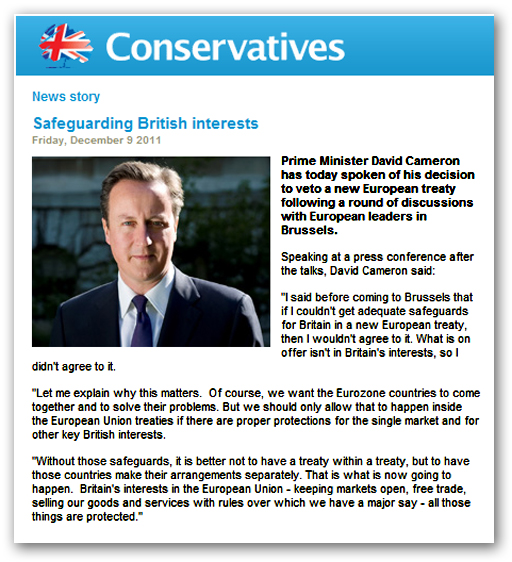 Never mind the lèse majesté - "my Parliament" indeed - on the Conservative Party website (screen grab above), we see an extract from this press statement, with the introduction telling us that, "Prime Minister David Cameron has today spoken of his decision to veto a new European treaty following a round of discussions with European leaders in Brussels".

Notably, he does not use the word veto in his formal press statement, but the Daily Mail records him saying that, "I effectively wielded the veto". That seems to have been in response to a question from a journalist and although it has disappeared from the website, we have a screen grab.

So Cameron has it that there was a document that was ready to sign, one which he "effectively" vetoed – with the "effectively" being written out of the script as his own party website, speaking in his name, claims that he vetoed the treaty. Yet the Irish deputy prime minister talks of a text that needs to be finalised.

Of course, it could be that there was the text of an EU treaty amendment – that is what Cameron is claiming, unlikely though that is. However, if there was a treaty draft ready for signing, it must exist and be available for scrutiny. An FOI question, therefore, is on its way to No 10, asking for sight of the same. So, Cameron either coughs up the document, or he is unable to prove that he is not a liar – and that is without pursuing the awkward question of whether there was an IGC in which a veto could be exercised, "effectively" or otherwise.

And, of course, if Cameron cannot recall precisely what he saw, there were others in the room. They too have their national freedom of information requirements. One way or another, one suspects, the truth will out.