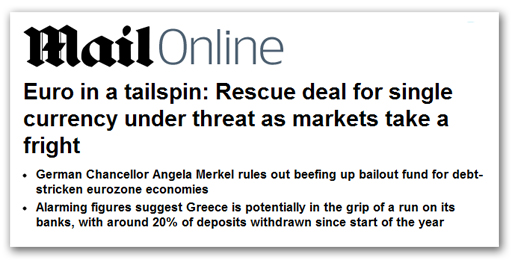 "At least one eurosceptic blog claims there was actually nothing to veto (no new treaty was actually on the table) ". So writes Kathy Gyngell, a "research fellow" at the Centre for Policy Studies, in The Daily Mail.

She is exploring the role of the BBC in reporting The Boy's little adventure in Brussels, and it therefore not focused on this particular issue. Nevertheless, she demonstrates that there is a wider awareness of the EU Referendum stance.

This we already knew, as the hit-rate has soared recently and is higher than recently, so people are reading the message. And people like Jack Straw (former foreign secretary, so he will know the score about negotiating treaties), is well aware that there was no treaty to veto.

The slightest knowledge of EU procedures would affirm that that there was no treaty to veto. And now, according to Reuters, we have Lucinda Creighton, the Irish European Affairs Minister, talking about the prospects of a referendum.

And that is the line Cameron should have taken – the only line Cameron could have taken, had he wanted to veto the treaty. You can't veto a statement of political objectives – which is what, in effect, he sought to do. You have to wait until there is a definitive treaty draft on the table.

By then, of course, several months would have elapsed. The "colleagues" would have invested much time and political capital in producing a final version of the treaty. They would thus be less inclined to play games.

Cameron would then have had real leverage, because at this stage the "colleagues" would not want to start all over again, with an intergovernmental treaty. He could have negotiated real concessions and come away with real achievements, instead of as now, where the treaty goes ahead anyway, but without UK involvement.

All this, though, begs the question as to why the media choose to ignore the fact that Cameron cast a fantasy veto on a non-existent treaty, when they cannot be unaware of the facts.

The explanation is that the media collective prefers to run with the agreed "line", the narrative dictated by the herd. This is what is known as "constructive ignorance" arising from group self-deception. They believe Cameron vetoed a treaty because that is what they want to believe ... it fits the narrative. And if the media collective believes something, it becomes their reality.

However, there is also the political agenda here, as well, and the MPs – especially the Tory europlastics, most certainly want to believe the myth. And there is nothing more obdurate than a Tory MP in the grip of a tribal belief system. That is impenetrable. Anything that passes for native intelligence goes out the window.

But, it seems, those same Tory tribesmen are planning their own form of mischief. This is according to the paywall Times which is warning of a europlastic ambush in the New Year, when they plan to hijack a vote intended to overhaul the eurozone bailout fund.

This, it would appear, is another attempt to force a referendum vote, the pursuit of an in/out referendum being the only tactic these limited intellects can cope with. Nothing changes in their world. It takes a huge effect to get an idea into the collective, but once it lodges, it is immovable.

As always, though, this is the wrong tactic, the effect of which is uncertain and – even if successful in forcing a referendum (unlikely), would rapidly be overtaken by events. But then, the europlastics are playing this game for electoral advantage. And as we all know, when votes are at stake, longer-term strategic issues are of no relevance to the political collective.

But the reality is that the euro continues under pressure and the chances of its longer-term survival in its present form become more remote by the day.

Thus we have Simon Jenkins asserting that the current preoccupations are irrelevant to the bigger picture. In a few weeks' time, Cameron's little adventure in Brussels will be a distant memory, as we are embroiled in yet another instalment of the existential crisis that will eventually bring the euro down.

One would like to think that some of the europlastics are giving some thought to the shape of the political realities that will then prevail, but that is probably too much to hope for. For the political collective, reality is not their strong suit.