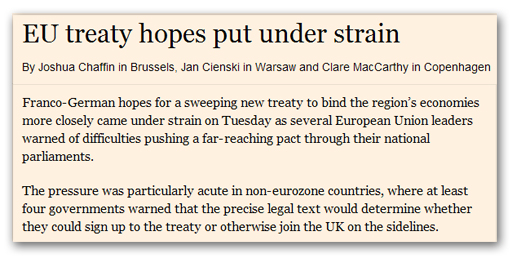 The contrast between our pathetically inadequate popular media, and the grown-ups could not now be more acute.

On the one hand, we have the British press (buoyed up by the equally loathsome broadcasters) making a meal of the personality-driven soap opera, as it describes in loving detail the interplay between Cameron and his deputy prime minister, over the imagined veto of the non-existent treaty.

The facts are definitely taking second place to the narrative, and the media has long given up any pretence of even doffing their caps to the need for accuracy. Their fictional account of events is perfectly suitable for the drama with which they are obsessed.

On the other hand, we have a real world report, which has leaked into the Financial Times, courtesy of Joshua Chaffin in Brussels, Jan Cienski in Warsaw and Clare MacCarthy in Copenhagen. Accidental its presence might be, but it offers a sanguine dose of reality.

In so doing, it records concern in EU member states, and particularly those in non-eurozone countries, as to whether the new rules being proposed would be binding only to eurozone governments or to all signatories.

What here is so remarkable is Petr Necas, the prime minister of the Czech Republic, who is commenting on the state of play. "Right now", he says, "there is not much more than a blank sheet of paper and even the name of the future treaty might still change". He adds: "I think that it would be politically short-sighted to come out with strong statements that we should sign that piece of paper".

That is a glimpse of the real world. At this stage of a treaty negotiation – especially one that is going to be as complex as the instrument that will be needed to implement the proposed fiscal compact - nothing formal will exist. It will be several months before the lawyers, civil servants and constitutional experts can knock the political objectives into shape and produce a water-tight treaty draft.

In other words, there is no treaty in existence at the moment - "not much more than a blank sheet of paper", as Petr Necas. And it was no different with the putative amendments to the Lisbon treaty.

One should recall that Van Rompuy only defined what changes might be needed to the treaty, setting out the general political objectives. Not only was this very far from being a finished treaty, he was proposing a Council meeting in March to give a mandate for limited treaty change, followed by an intergovernmental conference (IGC) to draft the amendments. Once again, this is clear evidence that a treaty cannot have existed last Thursday/Friday.

Yet The Boy persists with his mantra (Col. 537), that he "was not willing to sign up to a treaty change that passed power from Britain to Brussels", even though it is plainly evident that there was no "treaty change" to sign. In column 525, in response to Miliband, but not in his main statement, he says:


The right hon. Gentleman asks what we gained from the veto. I will tell him: we stopped Britain signing up to a treaty without any safeguards. That is what we gained.

Thus far, the Boy is content to indulge in his Walter Mitty fantasy, but then Jack Straw questions him directly. He says:


There was no draft treaty before the European Council last Thursday and Friday; there was a set of draft conclusions. Will the Prime Minister set out the paragraph numbers that he thinks would have damaged Britain’s interests had we agreed to them?


As I said in my statement, the eurozone members wanted to create a new treaty within the EU, which has all sorts of dangers. If the right hon. Gentleman looks at the letter that Angela Merkel and Nicolas Sarkozy sent, he will see that they specifically wanted the 17 to look at issues such as financial services and the market within that treaty. Without safeguards, a treaty within a treaty would have been far more dangerous than a treaty outside the EU.

Up against the wall – and given free opportunity to set the record straight – all Cameron can assert is that "eurozone members wanted to create a new treaty within the EU". He adds: "They specifically wanted the 17 to look at issues such as financial services and the market within that treaty".

This was a treaty to come – not one that was in existence that he could sign up to, much less veto. In column 534, we get further prevarication. "There would be a threat if there were a treaty of the 17 in the EU without the proper safeguards", he says. "That is why I vetoed that approach".

Note the precise phrasing: "if there were a treaty of the 17 in the EU", he says, then adding that he vetoed not a treaty but an "approach".

In the entire statement yesterday, running to over 90 minutes, with 101 backbench MPs speaking, the word "veto" or its derivants was used thirteen times. Cameron used it four of those times. This is not a man crowing about his achievement – which is just as well. You can't veto an approach. The veto exists only in his imagination, and the putrid mind of the media collective.