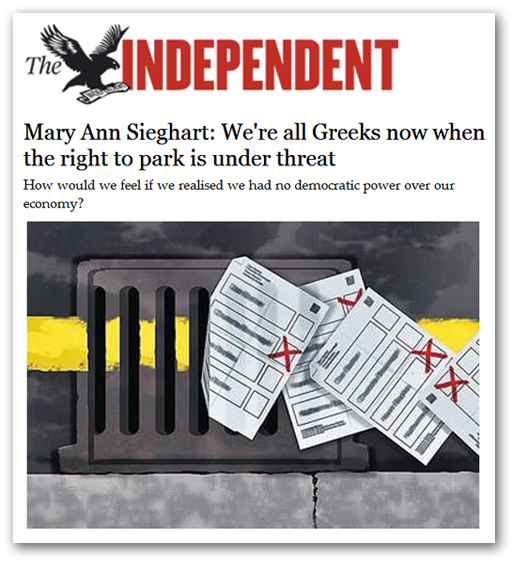 Mary Ann Sieghard in the Independent complains about Westminster City Council plans to abolish free parking on Sundays, evenings and bank holidays, likening the absence of democracy and accountability in the system to the situation to Greece.

She is right to complain, of course, but like Simon Jenkins and Philip Johnston who have dealt with aspects of this issue, her thinking is alarmingly one-dimensional. This really isn't just about parking, but about the whole range of council charging, to which Booker drew attention and I have explored.

There are two elements here – firstly that local authorities gain only the small part of their income from council tax (less than ten percent), the segment that is vaguely accountable to the public. As much again comes from other fees and charges, of which parking fees is a part, but none of which income is subject to any real accountability or democratic control.

For Mary Ann Sieghard, it is fine to single out parking, but it is about time that she and other journalists saw the bigger picture. These charges as a whole are offensive, not least because they enable local authorities to by-pass what little controls there are over their expenditure, and thus frustrate attempts to rein in their spending.

But most of all, what should be realised is that councils gain most of the income from central government – more than sixty percent. He who pays the piper calls the tune, to which extent local government is local in name only. Largely, it is an agent of central government and does its bidding.

Speaking for myself, I tire of the ritual warnings by councils, complaining of "tax dodgers", as if they somehow had a rightful claim to our money. But with a democratic deficit so huge, and an almost total lack of accountability, morally we owe them nothing.

We pay their taxes because we are force to pay – because, we get sent to prison if we do not pay. And if we do not pay their loathsome charges, they set bailiffs on us, with rip-off charges that amount to theft, about which the police do nothing. That is not democracy. That is the action of a totalitarian state.

It is about time Mary Ann Sieghard and other journalists looked around them and noticed what was going on – not that they will. Most are not capable of getting the point.