Making a meal of a meal 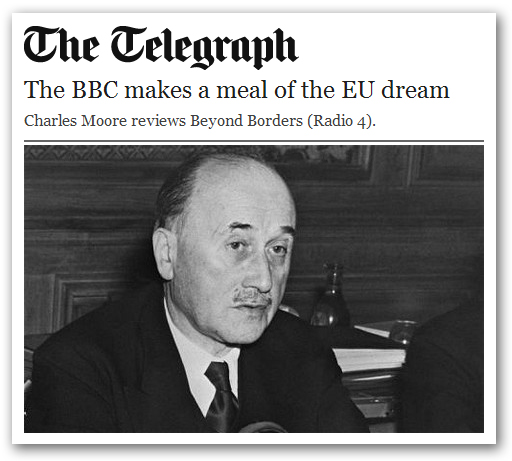 The great, revered, mighty and all-knowing Charles Moore reviews the BBC play on Monnet, and the Schuman Plan. I did it better, but then I was co-author of the definitive history of the EU, which Moore hasn't read, otherwise he might not display the level of ignorance that he does.

Typically though, Moore cites europhile (and above-the-liner) Hugo Young's book on the EU, which he evidently has read. One wonders whether he is conscious of the many errors made by Young, including his slavish adherence to the commission hagiography on the genesis of the EU, one that amounts to almost pure fiction.

Where Moore himself goes wrong is in addressing the claim that the Schuman Plan was all about inventing the Coal and Steel Community, then seeking to shoot it down by declaring that Monnet was not breaking completely new ground.

Typically of his breed though, Moore's horizons do not stretch far back enough. He cites Hitler’s overlord of the wartime economy, Albert Speer, who held secret discussions with his counterpart in the collaborationist Vichy government, Jean Bichelonne.

Both men wanted a "European Economic Union", and the best way to get this going was to coordinate production between the French and Germans in Alsace-Lorraine and the Ruhr, with the Germans producing the armaments and the French doing the rest.

Needless to say, Moore asserts, these talks did not form part of the play, Beyond Borders. Monnet developed comparable ideas in the post-war context.

Thus does Moore miss – and remains completely ignorant of the pre-war genesis of the Monnet plan. Not least, as we pointed out, the prototype for the Coal and Steel Community was developed by Louis Loucheur in the 1920s, when an attempt was made to combine the steel industries of France and Germany (and Luxembourg) in an attempt to prevent war.

But Moore's greatest blind spot is that he takes at face value the play's stress on the importance of the High Authority – the proto-commission which Monnet himself in his autobiography calls "the first government of Europe". It is this supranational authority that overrides national sovereignty, and makes things happen.

This, though, completely misreads the situation. From his experience of the League of Nations in the aftermath of the First World War, Monnet concludes that the central flaw of the construct is the veto. His great invention, therefore, was qualified majority voting and the progressive abolition of the veto. It is that which gives what has become the European Union its supranational characteristics.

Then to handle affairs with his new device of QMV, Monnet with his friend Salter created the EU structures, details of which were finalised and published in 1929, under the title "The United States of Europe idea".

Unaware of this, Moore's criticism of the play is as superficial as the play itself. And his omissions are no mere abstract details – they are fundamental to the understanding of what the European Union is, and how it works.

What we have here, then is a fascinating – if worrying – phenomenon, where in our political classes and "above-the-liners" we have an almost wilful refusal to come to terms with the EU.

It is this ostrich-like behaviour which allows the media to call European Councils "summits" and accept a claim from Cameron that he had used a veto – which anyone who understood the fundamentals of EU history would immediately recognise as absurd.

One wonders sometimes whether there is a deeper psychological motivation here, where our élites, in pursuing British membership of the Common Market and now the EU, are so horrified by what they have done that the only way they can live with themselves is by going into denial.

Doubtless, there are other explanations, although one does find it increasingly hard to understand why our élites are so ignorant about the EU, and seem to revel in that ignorance.