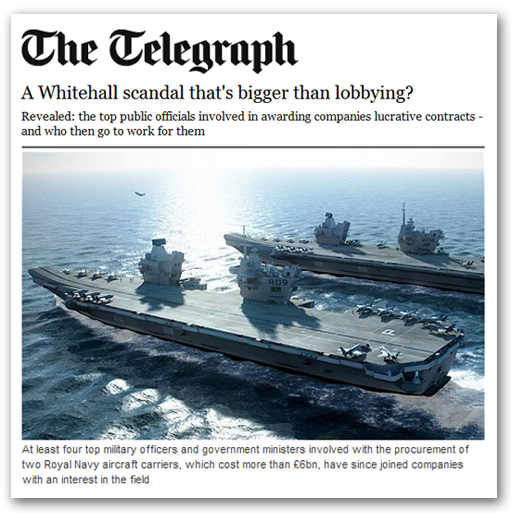 Never let it be said that the entire output of the MSM is garbage, even if too much of it is. But if the bulk of stories approached the quality of this one by Andrew Gilligan, I would probably still be buying newspapers.

"Is it a scandal bigger than lobbying?", Gilligan asks, referring to the extremely dubious practice known as the "revolving door", where ministers, officials or military officers involved in controversial public-sector contracts then go on to work, at high salaries, for the beneficiaries of those same contracts.

Personally, I think he is right to ask, and would assert that it is a scandal of similar or greater magnitude – although not unrelated. Many of the "revolving door" beneficiaries end up as lobbyists, using their contacts with former colleagues to influence the purchase of goods and services for the MoD.

We (Booker and I) met this phenomenon when we were investigating the purchase of the Panther
Future Command and Liaison Vehicle (FCLV), inferior in all respects to the competition and considerably more expensive, yet selected in what was very clearly a rigged procurement process.

Only latterly did we discover that the man in charge of the selection process for the MoD subsequently went on to work for the manufacturer as a consultant, a man so brazen that he wrote a letter to The Sunday Telegraph boasting of it.

Undoubtedly, there were similar forces at play in the selection of the General Dynamics with its Piranha as the preferred bidder for the FRES utility vehicle – another procurement competition that was clearly rigged.

Gilligan does not refer to either of these contracts, dealing largely with the broader issues – which is fair enough. But therein lies the weakness of the piece, in that it does not deal with the detail.

That, of course, could be remedied if Gilligan was allowed to produce follow-up stories, but one fears that – despite the importance of the issues raised – this will be a one-off story.

Nor, necessarily, will Gilligan be able to see the linkage with the wider problems in equipment acquisition. There, we saw a parallel story where the Public Accounts Committee (PAC) complains of the delays and expense of producing FRES utility vehicle, yet is totally unaware of the corruption behind the scenes.

Not least of the PAC failure is its constant reference to "procurement failures", when that is not the problem. In many respects, the actual procurement process – the physical task of selecting and buying equipment, works tolerably well. The actual failure is a definition problem, with the users unable clearly to define what they want, or stick to a specification once agreed.

There, there is undoubtedly linkage between the PAC complaint and the Gilligan findings. Too often, specifications drawn up on the basis of operational need are modified (to the disadvantage of the end user) as a result of high-level intervention by "revolving door" lobbyists.

By this means, billions are misspent or wasted, with the military ending up with overly-expensive and often useless equipment, less effective than equipment which could have been bought at a fraction of the price.

Perhaps we are being too pessimistic, and Gilligan will be allowed to pursue this matter. It would be helpful if the various select committees also followed the trail, although one should not hold one's breath. The committees tend to be part of the problem.

In the meantime, however, we should be grateful that the MSM is still, on occasions, able to produce a quality product, even if the event is so infrequent as to be remarkable.