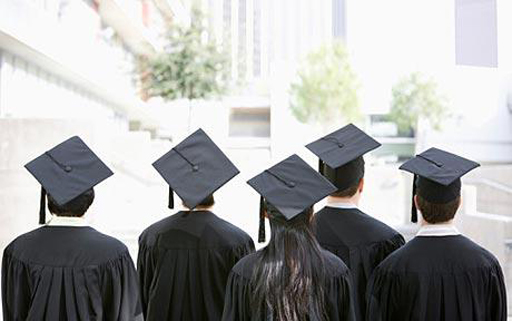 Thomas L Benton, in The Chronicle of Higher Education (via Small Dead Animals) comments on the dire situation in undergraduate education. Although addressed to an American audience, it has a considerable resonance here, this following passage catching my eye:


... many tuition-driven institutions struggle to find enough paying customers to balance their budgets. That makes it necessary to recruit even more unprepared students, who then must be retained, shifting the burden for academic success away from the student and on to the teacher. Faculty members can work with an individual student, if they have time, but the capabilities of the student population as a whole define the average level of rigor that is sustainable in the classroom. At some institutions, graduation rates are so high because the academic expectations are so low. Failing a lot of students is a serious risk, financially, for the college and the professor.

Some years ago, I experienced this personally when I helped out my PhD supervisor, doing the preliminary marking for first year honours degree dissertations. Applying basic rules of literacy and logic as my measure, I "failed" more than 60 percent of the papers.

Very much in accordance with the above, my supervisor reinstated all of them. The motivation was entirely economic. Keeping a course running is entirely about "bums on seats" and failures make the courses economically unsustainable.

Thus, first year students who should not pass are kept on. By the time they are in their third year, they cannot then be failed for inadequate work. Questions would be asked (not least by the students) as to why they had been allowed to continue. Thus, not only do we have second-rate degrees, we have second-rate students passing them, debasing the degree qualification as a whole.

A major part of the problem, in my view, was the destruction of the polytechnic system, turning well-founded vocational diploma courses into substandard degrees. Students who otherwise might have emerged with useful skills instead come out with something not half as good, yet with an inflated sense of their own worth and importance.

Yet, for all the volume of discourse on higher education, there seem to be few if any politicians who are prepared to address the fundamentals. There are too many degree courses that should not exist. Turning good polytechnics into second-rate universities has been a disaster, and needs to be reversed.

And, while university degrees might continue to be provided on a fee-charging basis, many vocational diplomas would attract employer subsidies, providing a secure entry for disadvantaged students into gainful employment.

However, one need not expect change. Modern politics is not about solving problems, but about perception – a miasma of belief systems designed to attract a following and garner sufficient support to gain office … where, of course, the system is run by former second-rate students with second-rate degrees.

I won't say we are domed, but it is difficult to see a way out.