To the shame of us all 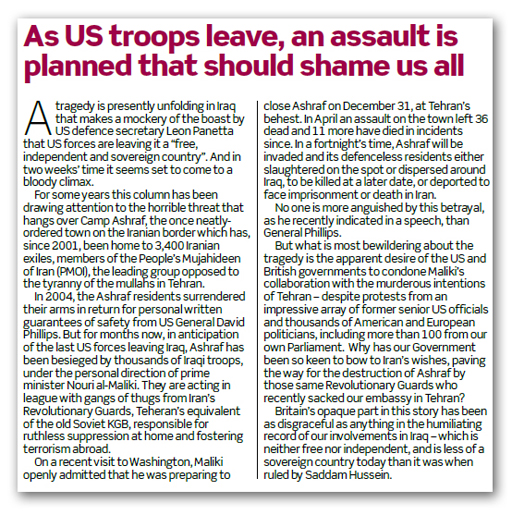 Booker is one of the very few British journalists to cover what is a scandalous situation in Camp Ashraf, Iraq, and his story speaks for itself.

My own basic "take" on this is that the PMOI are being somewhat naïve if they believe that they can maintain a highly organised and disciplined camp, with 3,400 residents parked on the border of Iran. As a former terrorist organisation, but one which has now renounced violence, the existence of the camp is nevertheless provocative, and was bound to incite a reaction from the Iranians

Given the vulnerability of Iraq to Iranian intervention, and the damage they can do to the fragile and uncertain peace (if it can be called that), it is also unsurprising that Maliki is caving into pressure from the Iranians and moving in to close down the camp.

That said, the behaviour of the Americans – making pledges that they are clearly not honouring – is disgusting, and our own government has been supine over the whole affair.

With casualties mounting, and even yesterday the Iraqi security forces ejecting the staff in charge of maintaining and up-keeping of Ashraf’s central power generating station, the situation is deteriorating to the point where the basic human rights of these people are being ignored.

And once again, one finds oneself – unwillingly, because it seems to be getting repetitive – criticising the British media (but also the international media) for its reluctance to publicise the human rights abuses going on here. One suspects if they were Palestinians up against the Israelis, the BBC for one would be crawling all over it.