Taking candy from a baby 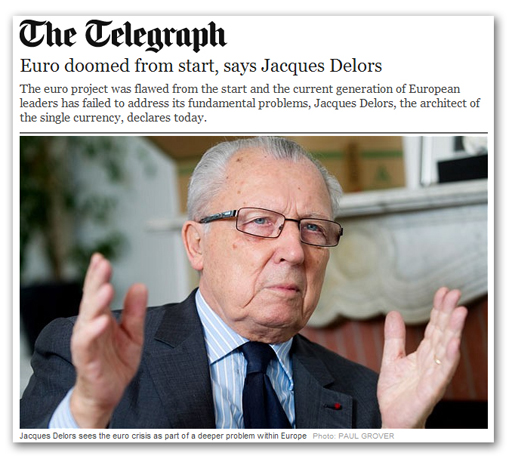 Having spent most of their careers avoiding talking (and therefore thinking) about "Europe", it is unsurprising that our political and media establishments know very little about the subject, showing a lamentably shallow grasp even of the basics.

It is equally unsurprising, therefore, that an ineffable lightweight like James Kirkup of the Failygraph should take at face value the interview by Charlie Moore and fall for the dissembling warhorse Delors. Between them - Moore and Kirkup - they have managed to record uncritically his attempts to re-write history, all as part of the continuing attempts to salvage le projet from its inevitable doom.

Delors, in fact, knows his enemy. He is addressing a media that is incapable of thinking for itself, and which is happiest reporting court gossip on a "he says, she says" basis, then passing it off as journalism. And, knowing this, the old fox has pandered to the English media love of the interview, filling Moore's smug little mind with a farrago of tosh, which the dismal man has processed into a space-filler for his joke newspaper.

Central to this is a bizarre claim by Delors that the current debt crisis in the eurozone stems from "a fault in execution" by the political leaders at the time of the euro launch and who oversaw the euro in its early days.

Leaders, we are told – and one presumes that Delors had a straight face as the gullible Moore transcribed this fiction - "chose to turn a blind eye to the fundamental weaknesses and imbalances of member states' economies".

Finance ministers (sic) did not want to see anything disagreeable which they would be forced to deal with, Delors is recorded as saying, so the euro came into existence without strong central powers to stop members running up unsustainable debts, an omission that led to the current crisis.

Delors, reading his words this morning, in print, no doubt cannot believe his luck in finding a journalist gullible enough to copy down such transparent dissembling, or a newspaper that has an editorial team stupid enough to publish it, but the truth is that almost any British political hack would have done the same, and most newspapers would have carried it - as indeed, we see from the speed with which the rest of the media is piling in, to copy-out the story.

The point is, of course, that the weaknesses in the euro at its launch were extremely well known, and had been flagged up well in advance by the MacDougall Report of 1977, which had warned that member states would have to pool at least 15-20 percent of their official reserves to fund fiscal transfers, without which the single currency would not be viable – on top of which there would have to be economic governance to manage the cash flows.

But, in community politics, knowing something and doing something about it are two different things. The one does not beget the other. The whole modus of European political integration depends on the application of the "Monnet Method", a process of engrenage or "salami-slicing", which involves the project advancing in bite-sized chunks in tune with the political realities of the time.

And there is the crunch issue. The "colleagues" knew full well in 2002 when the euro was launched that economic governance and pooling of reserves was needed. Romano Prodi, commission president at the time of the launch, never tired of saying so.

While absolutely essential, though, the community was not ready for these steps, so the launch went ahead with what was politically practical for the time. The "colleagues" went as far as it was possible to go, knowingly and deliberately leaving the unresolved issues to be dealt with at a later time.

In going ahead, the "colleagues" were relying on yet another technique to remedy the faults – the beneficial crisis. In the fullness of time, the inherent inadequacies of the single currency structure would show up, in a crisis situation, driving the politics and creating the political will by which the necessary changes could be implemented. This was no mistake or "error". That is the way the European Union works ... and Delors was the supreme exponent of the method.

Faced with the pastiche on offer, a knowledgeable journalist would have chuckled hugely at the little jokes, and told Jacques to pull the other one – it had bells on. The pair could then have got down to business and a half-decent piece might have emerged.

As it was, Delors had chosen well – Moore swallowed the bait, hook, line and sinker. It suited the "colleagues" to promote the error meme, and Delors was just the man to run it past the gullible and ignorant Failygraph.

Amusingly, neither Kirkup nor Moore realise they've been had. Moore will be preening himself, adding to his lunchtime legend as the man who interviewed Delors. On the other hand, Delors may well be reflecting over leisurely lunch with friends - no doubt with a chuckle - how easy it is to pull the wool over the eyes of the British media. It is like taking candy from a baby, mes amis, he will say.