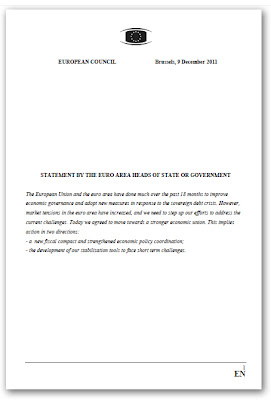 Through the day, some of the background to the issues paraded in this morning's press will become clearer – others will become murkier and, in other areas, we will end up even more confused than we are already.

The first thing I need to do is firm up my immediate response to events, and then build on what we know, taking into account the developments of today.

First port of call is the Council website, where we find the text of the statement, over which the media have been hyperventilating, and thence to affirm quite how much the fourth estate have been taken in. Cameron – with his PR skills to the forefront – has engineered a huge coup de théâtre. This is smoke and mirrors on an industrial scale.

The essence of the Cameron coup, of course, is to convince the ever gullible media that somehow he has vetoed a new treaty, and thus altered the course of events, protecting British interests.

Thus Cameron the pansy, under fire from all sides for giving in too easily to "Europe", reinvents himself as the "hard man", getting tough with Europe, emerging as the darling of the Conservative right wing, defender of the faith and all that. Boris has already fallen for it. Many more will follow - they are sooooo easily pleased. 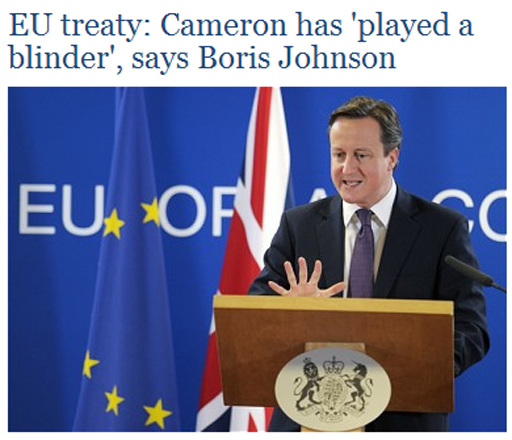 "I effectively wielded the veto" goes the Cameronian legend, from the lips of the hero himself, except he did no such thing. The statement, to which he ostensibly takes such great exception is a "Statement by the Euro Area Heads of State or Government". And unless you know different, Cameron is not a euro area head. He could not, on any account, veto a statement issued by a group of which he is not part.

Of course, it could be that The Boy has forced the issue, making the smaller euro area group deliver the statement, instead of the whole European Council, but that is not what is being claimed. The "hard man of Europe" has blocked the treaty.

Looking at the small print of the statement though, we see that the position of the UK has already been factored in, and discounted. Whatever Cameron said last night has had absolutely no impact on events.

Some of the measures described in the statement, it declares, can be decided through secondary legislation. In other words, no treaty changes are necessary, and no direct involvement by member states is needed. Either the ECB or the commission can adjust the rules. And other measures (such as the financial transaction tax) can be contained in primary legislation. Again, there is no treaty change needed.

Then, says the statement, "Considering the absence of unanimity among the EU Member States, they (the heads of state or government of the euro area) have decided to adopt other measures "through an international agreement to be signed in March or at an earlier date".

In a direct snub – or a harbinger of the climbdown to come by Cameron – the statement goes on to say that the "objective remains to incorporate these provisions into the treaties of the Union as soon as possible". In other words, work will continue apace on preparing amendments to the Lisbon Treaty, although there will be no IGC as yet.

With no IGC, of course, Cameron is stuffed. For all his willy-waving, the changes are to be introduced though an "international agreement", the negotiations on which will be conducted without the presence of the UK. Cameron is not invited, and will not be a signatory.

There can be no demands for repatriation of powers, no veto and no referendum. Cameron has been relegated to the role of impotent bystander.

Furthermore, within that framework, there is an important development which all but by-passes the EU treaties, yet still manages to enforce budget discipline on member states, requiring of eurozone members that their general government budgets shall be balanced or in surplus.

This, incidentally, is defined as ensuring that the annual structural deficit does not exceed 0.5 percent of nominal GDP.

However, taking into account Sarkozy's reservations about the encroachment of supranationalism – as expressed at Toulon, this is being made enforceable in an ingenious way. Rather than making it a treaty obligation, such a rule will also be introduced in member states' national legal systems at constitutional or equivalent level. Thus, each member state will be obliged by its own constitution to obey the deficit rules.

The rule will, according to the statement, contain an automatic correction mechanism that is triggered in the event of deviation. For external oversight, the rule will be defined by each member state on the basis of principles proposed by the Commission. And the ECJ will verify the correct transposition of the rule at national level.

Thus, le plan continues apace. Between yesterday and today, nothing has changed in that respect, except that Cameron and the UK are now out of the game. It would be nice to think that we were in the departure lounge, but that is not Cameron's intention. He still wants to play.

But where the "hard man of Europe" goes next is anyone's guess. Perhaps the "colleagues" will invite him to the ceremonial signing of the new treaty in March – as an observer. The sky's the limit, and by then he will probably need the air miles.